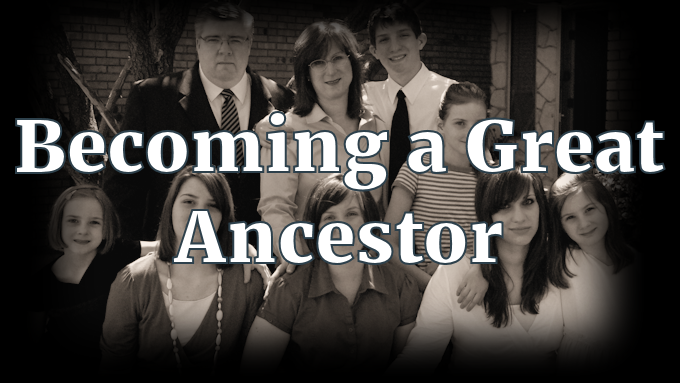 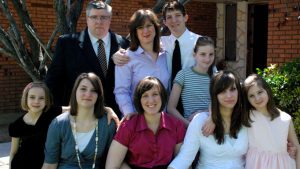 The image here of my family is now ten years old.

I had no idea when we took this picture that it would come to represent the end of an era for my family.

The picture was taken the day our eldest daughter left for her mission. Sandy and I were 45 years old.

In the ten years since life has dramatically changed for us all. We should have better anticipated that.

But if you had asked me then to predict what ten years would bring in the lives of everyone in that picture I would have never been able to get close to what has actually has transpired.

Gone from our lives are a few dear ones we deeply miss. We now can claim three in-law children and four grandchildren (going on five) that we have added to our family in that time span.

The changes in 10 years are profound on a personal level, too.

Ten years ago I was a busy executive, traveling all over the west in a career that had blossomed. I was determined then to push on two work fronts to make money for the ever growing demands of my family. I was also absorbed with world events and engaged in the rocky politics of the time.

So very much of all that has changed.

I do not share many things on this site of my own family past and that of my children. But just because you do not see those things does not mean they are not there.

For many years now I have built pages, image and video libraries, and document repositories of my family that so far only I alone can see on this site.

I am building the record but not yet sharing it for many reasons.

We are still busy making our family history. For me to share my impressions nearly as fast as things happen would, I think, perhaps disrupt the natural flow of events.

It could draw unnecessary and unwanted attention. Some would take it all to be self-serving.

What we’re doing here is not a look-at-me social media thing of our day. What we are doing is attempting to comprehensively record the events and lessons of our 21st century lives. 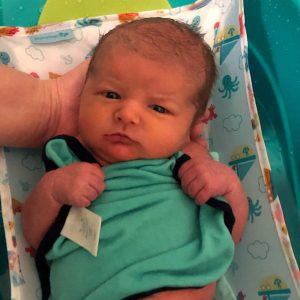 This week, as I had the opportunity to peer into the face of my newest born grandson, Harvey, I could not help but wonder what he will think of those pages now hidden.

I will know Harvey and, if I’m lucky, I may be able to meet and know his children.

His grandchildren I likely will not know in this life.

It is for Harvey and his children and grandchildren that we make these efforts on the hidden pages. I want them to know and have access to all the family history I did not have growing up.

In the past decade I have found that the lines that separate the generations are more like curtains of fog.

We live largely the same lives. Events in our day today parallel the events in the lives of our ancestors.

Yes, we live in a different time but we can hardly claim to have many differences in our life experiences.

We are born, we marry and have children, we grow old and we die.

Sandwiched between those commonalities are the incredible details shaped mostly by our individual character and the events of the time in which we live. These become the stories that get passed down.

If my efforts in family history have taught me anything is that I find greatness in all of my ancestors – no matter who they were or where they were from.

Though they were normal in every sense, ordinary to those on the outside almost to the degree of tedium and mundane, they are in my eyes, after research, study and pondering, great to me in every sense of the word.

They are survivors, inventors, pioneers and change artists. They are explorers, dreamers and builders. They were rooted in faith, hard work and family. Especially family.

As I grow old and study their lives more I have come to feel that not only do I know their hearts but also I have come to recognize their faces and personalities.

This has happened only because they left enough of themselves behind for us to find.

I get frustrated by the lack of detail, by not knowing precisely their thoughts, impressions and feelings. I long for greater depth of understanding. I feel denied sometimes by stories lost or skimpily shared.

But the harder I work to glean the details the more I am humbled by what they come to mean to me in my mind.

What develops is yet another dimension of love within my human heart – one I never considered earlier in life.

They take up a unique space and they give me the sense of something greater that I am a part of.

I dare not think that my life and myself as a person could ever be equated to those of my ancestors. I could not have done what they did.

But decades and generations from now I find the inescapable truth that who and what I am will be meaningful in some way to the families of my great grandchildren.

I will be their ancestor.

Just as my ancestors, I have learned, are part of me, I will be, as their ancestor, part of them.

That is a sobering thought. It is also a joyful thought.

Together, my ancestors and me and my great grandchildren, are writing an incredible, unique story as a family and as individuals.

What then is my part? What are my obligations? How do I contribute? How can I be a great ancestor?

To me it comes down to two things: truth and faith.

As I walk through cemeteries I do not see “Here lies a great farmer” or “He died a rich man” engraved on headstones.

If there are accomplishments or accolades to be shared in stone it is nearly always tied to roles of family – “Beloved Grandmother” or “Father”, for example.

Death has a way of focusing on the biggest and most important roles we have in this life.

That is because real truth focuses on what matters most.

I want my progeny to know the truth about me as their ancestor. The details of my career, my travels and even my worldly accomplishments matter very little.

Too often when we tell the stories of our ancestors we focus on these things. We do that because we lack the forethought, the emotions and the reactions of what was behind all those details.

In my mind, if my great grandchildren know the feelings of my heart they will understand the actions behind the details of my life.

I cannot help but wonder what it would be like to know the anguish of Gabriel Westover when he sent two of his children to the New World knowing he would never see them again.

What was on the mind of Jonah Westover after the Indian uprising in Simsbury and how did that change the course of his family’s experience?

What could have passed through the mind of Jonathan Westover as he gathered the orphaned children of his brother’s family after the series of tragedies that wiped out the Jonah Jr and Abigail Westover family in 1714?

What was behind all the restless wandering in the lives of Amos and Ruth Westover, who spent 20 years of their lives in transit from Massachusetts to Canada and then to Ohio?

Alexander and Electa Westover obviously knew each other and their respective families growing up. There’s a story there. What are the circumstances of their love story? We know how it ended but how did it all begin?

What went through the minds of both Edwin and Ann in February 1857? He was 33 and already married. What did he think about having a 2nd concurrent wife and raising a 2nd family? She was just 17 and fresh off the handcart pioneer trail. What was in her heart?

Perhaps the circumstances of their lives did not allow for recording such intimate details or maybe they just never thought it would be important for them to do so.

But I know clearly that these things will be important to my grandchildren reading the records I will leave behind.

Our modern age is creating a record of all of us. Family search in future generations will detail the grades we got in school, the resumes we sent online, the things we said on social media, the doctors we visited, the driving records we compiled, the addresses we had mail sent to and even the money we made and spent.

But even still none of those details will reveal who we are in heart and mind.

I know this and I can speak to it. I can tell my grandchildren what I feel, think and how I choose to react.

Faith is and always will be an important element in individual history.

My Grandma Begich was a faithful Catholic, just as her parents were. When she was a young girl her mother, it is said, was beheaded because she wore a symbol of her faith – a cross – around her neck. A few years later her father died and Grandmother’s grief as a ten year old was so intense she tried to throw herself into his grave.

Her faith clearly shaped and influenced her entire life experience. It led her to beg my grandfather to not participate in World War II.

Grandma’s faith also shaped the upbringing of her children and its influence endures to this day with her grandchildren and great grandchildren. I’m convinced we cannot know Grandma Begich without knowing her faith.

The same is true of my Mormon ancestors. Ann Findley only really had about a decade living with Edwin. The 17 year old handcart pioneer girl who became his polygamous wife never wavered in her faith as she endured the deaths in her family that would separate her from Edwin.

For another decade in her life Edwin would live but would not be present in the day to day life of Ann Findley Westover. She toiled in the support of her family and in the service of her church and community.

The last 50 years of her life were spent essentially as a single parent and grandparent who worked hard to serve those around her. That was part of her faith and to me it tells the story well of her character.

The faith of our ancestors fills in many of the details we long for from learning of their lives. Faith to them – and to us – is merely an extension of the truth that makes up our lives.

Ten years is a mere blip on the timeline of our family history. Much has changed since that photo above was taken.

I can speak what I felt through this blip in time. It may not matter to anyone now.

The Voice of Arnold Westover