The Church History Library posted to Facebook the other day a link to archival information about the Women’s Suffrage movement in Utah in the 19th century.

This has always been of interest to me because I have been searching to see if the women of our family were active participants.

While I did not find anything new along those lines I did happen to see a collection of images titled “Consecration Letters”.

What could that be and did any one of our family send such a letter?

There were only 62 letters in this collection, all of them sent to Brigham Young. One of those letters was from Edwin R. Westover.

This is what Edwin wrote, in his own hand: 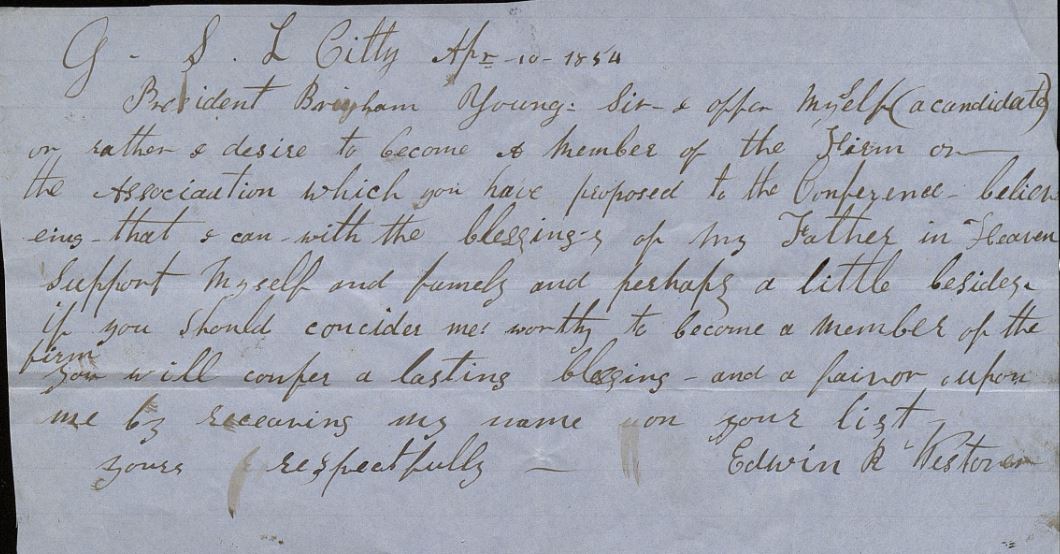 On a personal level, this is a very thrilling find. It says a lot about the mind, heart and character of Edwin Westover in 1854.

He was at that time 30 years old, a father to three children, living with his mother, and partnering with his brother to develop the house and garden they had in the Ninth Ward of Salt Lake City (around 4th South and 5th East in present day Salt Lake).

They also had a large farm they were starting to work at this time in what is known as the Cottonwood area of Salt Lake.

By 1854 Edwin and family had been in Salt Lake for about 4 years. Culturally they were in the center of everything, sharing with about 5000 people by this time in the overall population. Edwin is on record for attending the School of the Prophets down at the Bowery, which was located in what would become Temple Square.

And like everyone else the Westovers actively participated in welcoming and helping out the constant stream of new emigrants that came in to Salt Lake during the late summer and fall of each year.

Life was anything but easy.

While the valley was fertile due to streams bringing water from every canyon into the Jordan River that water had to be re-routed for farming. Timber could only be found at high elevations and finding what was needed to build required coordination and plenty of man and ox power.

In the 1850s the never-ending battle with crickets and the elements made food scarce.

As church leaders grappled with how to sustain the ever growing population, they experimented with a number of community-style solutions.

What Edwin was responding to in 1854 was the first whispering of what would later be called The United Order.

As referenced in his letter, Edwin attended a church conference, probably held in the Bowery and well attended overall, in the spring of 1854.

At this Conference Brigham Young taught:

I have looked upon the community of Latter-day Saints in vision and beheld them organized as one great family of heaven, each person performing his several duties in his line of industry, working for the good of the whole more than for individual aggrandizement; and in this I have beheld the most beautiful order that the mind of man can contemplate, and the grandest results for the upbuilding of the Kingdom of God and the spread of righteousness upon the earth. Will this people ever come to this order of things?… The Lord has declared it to be his will that his people enter into covenant, even as Enoch and his people did, which of necessity must be before we shall have the privilege of building the Center Stake of Zion, for the power and glory of God will be there, and none but the pure in heart will be able to live and enjoy it.. What hinders this people from being as holy as the church of Enoch? I can tell you the reason in a few words. It is because you will not cultivate the disposition to be so: this comprehends the whole. If my heart is not fully given up to this work, I will give my time, my talents, my hands, and my possessions, until my heart consents to be subject; I will make my hands labour in the cause of God, until my heart bows in submission to it.

No wonder Edwin and others wrote what they did to Brigham Young.

The next ten years in the life of Edwin Westover were spent in Salt Lake City and in Grantsville, Utah.

It was not yet a peaceful time for the Saints. Still to come were drought, the march of Johnston’s army, the Mormon Reformation of 1856 and the huge change of living the principle of plural marriage.

Every once in a while we get fresh information like this about Edwin R. Westover. Just when I think there is nothing new out there to get of him we stumble upon a treasure.

I get the feeling Edwin is prompting us as his grandchildren.

We announced a few a months ago an effort we call the Edwin Westover Family Project.

Think of it as a reverse family tree. We know where Edwin came from dating back nearly 500 years. But what we do not know is the entirety of his posterity. We’re trying to build that tree to including all descendants of Edwin, living and dead.

That effort has started and it is nearly 800 names – and that’s mostly the dead. You can see the roster by clicking here.

Now comes the hard part: how many more of Edwin’s family are counted among the living? Are you on the list linked above? Are your children, your parents, your siblings? How about your grandbabies?

Based on what we have so far we believe it is close to 2000 altogether who have descended from Edwin R. Westover.

Our mission between now and his 200th birthday in 2024 is to account for every one of them.

We will need help with this. Please go to this page and share what you know of the living descendants of Edwin R. Westover. Help us list them and help us reach out to them.

We believe all the family can be served through this effort. We’re looking for others to help with this.