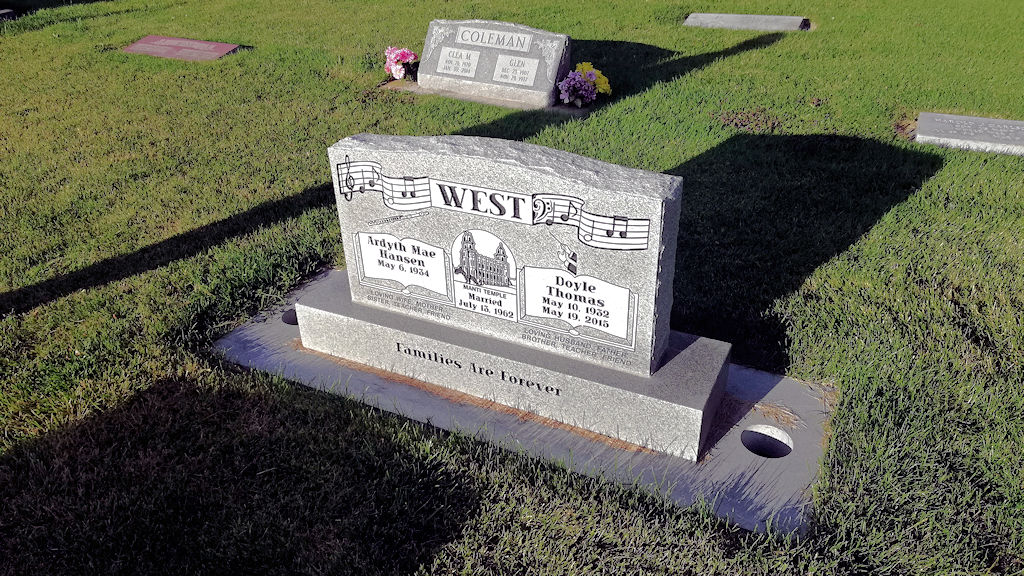 He was, to borrow a phrase, a master of the moment.

As the house lights came down the spotlight would zero in on him as he briskly made his way to the podium where he quickly bowed to the audience, receiving polite applause.

He held the note there for just long enough – the audience watching in curiosity. You could almost hear them thinking, “What in the world is he doing?”

And then, raising he eyes above and beyond the audience, a slight smile on his face, he brought down his baton and hundreds of voices responded:

Stunned, the audience would turn in their seats and look up, and there above them, dressed in white, were 500 young people, their eyes glued to the conductor.

Before the audience could turn back around the spotlight was taken from the conductor and he became invisible. The curtain had parted and in a softer light stood the Savior.

Conducting was Doyle West, a gigantic figure to me as one of those voices in the balcony.

To me he was a man thoroughly convicted of what he was doing in this production of “And It Came to Pass”, known to us as the Oakland Temple Pageant.

Doyle passed away in 2015 and only recently did I learn, via his wife Ardyth, that he was laid to rest right here in Smithfield, just blocks from my home.

Doyle and Ardyth West are well known to my family not only because of Pageant and years of association there but also because Ardyth is a Westover.

Now 84, Ardyth has really only known me via social media, where she keeps a savvy and watchful eye on all the family. She has responded and reached out to me with many kind thoughts.

In response to a recent post Ardyth sent me a message with her phone number, asking me to give her a call. So I did – and I was rewarded with what I like to call a hall of fame conversation — one of those conversations of a lifetime. In nearly two hours together on the phone, I found myself taking copious notes as this dear lady fed me resources, shared memories and laughed with me in sharing details of family members we both know.

She might not think as much of that conversation as I do but I tell you I left energized, enthused and anxious to follow up on all she told me.

She is, for all things family history even, a wonderful resource.

As we spoke of her dear husband she shared with me the details of where he is buried and indicated that she’ll likely never get back this way again while she is still living. She asked if I wouldn’t go visit his grave and see his headstone, which tonight we did.

As we searched tonight for Doyle’s grave I couldn’t help but go back 40 years in my memory to those summer rehearsals and performances of Pageant.

Around the age of 12 I was given a spiritual witness of the Prophet Joseph. But even though that was true I was a reluctant participant in Pageant. I am not the singer that my Westover cousins are and I’m certainly not a performer. I was also a bit resentful of how much precious summer time was devoted to Pageant.

But I can tell you that sitting in that balcony every night for two weeks – front row, most of the time – I came to love not only the music of Pageant but especially the message of Pageant.

It did much for my testimony and though shy and awkward I found my participation in Pageant during those teen years something of a secret obsession and a deep love.

Doyle West was one very big reason for those feelings.

I can remember once, before a Saturday afternoon performance, we had a quick rehearsal and Doyle said he wanted to work on “We are the Vision”. We began and he stopped us for a moment, to give some instruction, and then we began again.

We got halfway through the song and he stopped us once more.

“Do you realize what you’re saying in this song?,” he asked us. “Never was a time more exciting, never was a time such as this! We are the vision which the prophets saw! This is your song!”

And he started it again, ending that stirring anthem with tears streaming down his face. “Make no mistake my young friends, yours is the most important testimony given in this production. We didn’t actually need to practice that song. That was just for me.”

I love a good cemetery and the cemeteries here in Cache Valley are the best. 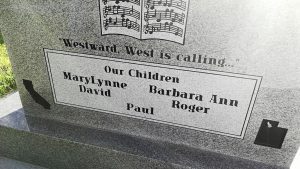 Smithfield has a beautiful cemetery. I actually spotted Doyle’s grave rather quickly but I couldn’t help hearing the songs of pageant – Who Am I?, Master of the Moment, Westward – over and over in my head, once again.

Why didn’t I know back then who Doyle and Ardyth are?

I was probably told but in the fog of youth – that dense, thick, dumb period where so very little sinks in – I never made the connection or saw the importance.

How very coincidental, it occurred to me, that here I am forty years later remembering those days but making yet another family connection now.

Why now? Why in this way? And how many times has this happened to me just this year?

My dear family, I want you to know a thought that rested upon me tonight as I looked upon Doyle’s grave.

We are being gathered – as a family – by forces unseen.

This could have happened forty years ago. Or a hundred years ago. But it IS happening now.

I want Ardyth to know how much I love her and how much I hope we have many more conversations like we did last night. She has given me folks to contact and somehow I sense I will be held accountable for contacting them.

The connection, officially, is via Edwin and his 2nd wife, Sarah Jane Burwell.

As previously noted, I’ve had contact this year with five individuals who hail from that line. I know we have a story to tell there and with their help we will tell it.

I continue to be amazed at the contact I am receiving from Westovers from all over.

Folks of different beliefs, folks from different places, some from as far away as Australia and England. What we hold in common is a shared heritage in our Westover name.

I want to learn who they all are and I want to share all that they have to contribute to the family record. It is much deeper and much more important to so many people than I ever imagined.

I pray the contact keeps up. I hope folks keep reaching out, asking questions, sharing information and resources. Miracles are happening – so many that I cannot possibly detail them all.

I know, as ever, there is great indifference from many. But some are starting to catch the vision and are starting to feel the pull of our ancestors. They ARE reaching out to us, and I know I am not the only one who feels that.

I pray we are worthy of all they are doing and that we in return are doing all we can.

Our Family in the Spirit World