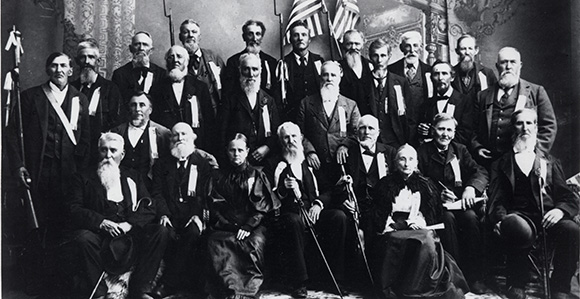 All year long I’ve made reference to a video (or two) coming out about Albert Smith. It is still a work in progress.

The challenge stems from what to include and what to leave out in telling of his story. Thanks to Albert’s journals and to a long life lived so close to events of Church and Utah history there is a great deal of information. There is little of the 19th century Mormon experience that Albert didn’t have.

He came from a religious family. That led to his conversion sometime in the mid-1830s, a time that saw him join the Church in Ohio and one that put him on a slow path to Nauvoo.

His intent was to settle his family where the Saints were gathering in Missouri. What stopped him? Something called the extermination order by Governor Boggs.

Around 1840 Albert and his family arrived in Nauvoo. They joined the Nauvoo first ward.

He joined the Nauvoo Legion.

Albert was called on a mission to New York in 1842, returning nearly a year later in 1843.

He helped to build the Nauvoo Temple. He was friends with Wilford Woodruff. He knew the Prophet Joseph.

Both Albert, and his wife, Esther, received patriarchal blessings from Joseph Smith, Sr.

They were there when the Prophet and his brother, Hyrum, were martyred.

Like others in Nauvoo, they abandoned the home they had built and the land they had developed when they were pushed west by a mob. They received their endowments in the Nauvoo temple in January 1846, before being among some of the first to head west. 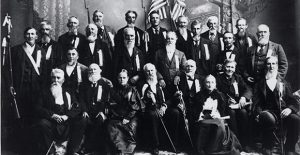 The 50th anniversary of the Mormon Battalion held 4 years after Albert died, in 1896.

Upon hearing of a need for 500 men for the Mormon Battalion, Albert and his 17 year old son, Azariah, volunteered.

They separated from their families for a full year, marched all the way to San Diego. Both would come home from the experience with severe injuries. Azariah would get thrown and kicked in the head by a horse and Albert was wounded when run over by a bull – three ribs years later were found to still be broken and separated from his sternum.

As they were headed to Salt Lake in 1847 they were told there was little food there and their company was admonished to go back to California. Azariah did return, for a season, working for a period at Sutter’s Fort where he would become part of the group that discovered gold there, ushering in the gold rush of California.

But Albert, anxious to return to his family, pressed on to Salt Lake, becoming one of the few pioneers of 1847 to arrive from the west.

Like all others, the Smiths set out to work to get settled in Salt Lake City. They had a terrible go of it the first few years. But there were miracles. In fact, the famous miracle of the seagulls actually happened to Albert Smith. He writes:

“When I got in sight of my grain I saw that it was covered with sea gulls. I stopped until they flew to another part of the field. What was my joy and surprise when I went on to the place and found every cricket destroyed. There was not one live one to be found while dead ones laid in heaps where the gulls had thrown them up when they done that they would fill themselves again and so continue to do. The Indians said that they were new birds that they never saw them before. I raised a large crop for 10 acres. I might mention a great many interposition of providence in our behalf without which we might have all perished.”

The next spring, Albert and family were called to be part of a pioneering group to settle Sanpete County – the first settlement south of Salt Lake to be established. I love the way Albert describes the general reaction to their new home:

“When we arrived at the place that is Manti, there was a large number in the camp that were wonderful disappointed with the place. Some went to Sever to see if they could find a better place to settle, but it was decided that this was the place where we was sent and that here we would settle.”

It would be his home for the next 43 years. There he would be known as “Father Smith”, a beloved member of the community who was older, most experienced in the church and faithful to the very core.

Again, all that he experienced in the coming years seemed to be drawn from the legendary experience of Mormonism in the 19th century.

It was there that Albert lost his first wife, Esther in 1856. He remarried almost right away and then, a short time later, he took on a plural wife who didn’t even speak English.

Almost overnight he went from having just 5 in his home to having 14 people under his care, including his disabled son Azariah, who was still suffering from fits of epilepsy from his head injury in California.

The crickets came back and the miracle of the seagulls did not repeat itself in Manti. Each year Albert would faithfully record his farm production and some years he grew nothing because of the pestilence or the lack of water. One year he records taking a trip by wagon to Bountiful to glean from fields of successful crops there, just so he could care for his family over the winter.

The life of plural marriage was not easy on Albert. In fact, after his second wife had pestered him enough for a divorce he gave it to her in 1865. 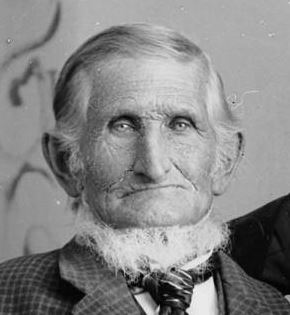 Throughout all this Albert lived faithfully and served in the ward and the community in Manti. He fought Indians and tried to be an influence to peace, an unpopular position to hold among anxious settlers. There were many skirmishes, and many people on both sides died. Albert preached for peace every time.

He continued his associations with Church leadership. When visiting authorities would visit he attended meetings and made a record of what they said. As first the temple arrived in St. George, Albert took note of the growing understanding of the doctrine of sealing families and vowed to take part.

He paid a professional genealogist to seek out the names of his ancestors and waited four long years for results. As the announcement was made for the Manti Temple Albert continued in those efforts in preparation, lending money and labor to that building as well.

To that end, Albert dedicated the last several years of his life to temple service and seeing that as many as 1500 of his family names were recorded as receiving ordinances under his hand or direction. He remained connected and devoted as well to his living descendants.

But for even all this I haven’t even touched on the lessons of the life of Albert Smith. That I will save for the video.

He was an extraordinary man, a man who lived the Gospel stubbornly, and a man whose understanding of the atonement led to one astonishing act of compassion that leads me to tears each time I think of it.

Right now, honestly, I’m trying to find a way to tell that part of Albert’s story.

It is tender. It is sacred. It is a necessary and, as far as I can tell, so far an untold story of our family history that needs to be shared and appreciated.

That part of Albert’s story is NOT told in his journal. Nevertheless, I would encourage you to head over to WestoverGenealogy.org to read the many pages of Albert’s journal.

I believe there is great value in getting to know him through his unique form of expression and in his own telling of his story.

The Harm in Do No Harm