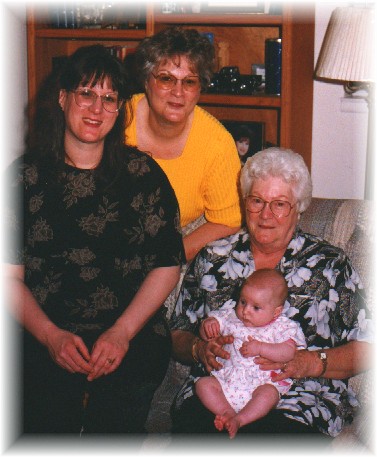 This past week we had the opportunity to do the baptism for Sandy’s grandmother, who left this life six years go.

I knew going into it that it would be a tender moment for Sandy but I was quite surprised that it ended up being the same for me.

It left me to ponder, after it was done, and as we walked out of the temple we had a very interesting conversation that ended with the question: “Does Grandma know?”

Too often the thought of death is one we avoid. The natural man tends to think of death with great finality. We know as members of the Church that there is a deeper meaning but even still we do not spend enough time pondering these bigger questions.

In 1 Corinthians 2, Paul advises “But the natural man receiveth not the things of the Spirit of God: for they are foolishness unto him: neither can he know them, because they are spiritually discerned.” (1 Corinthians 2:14)

After we had completed our work for Grandma and a few others in the baptistery that day I watched in wonder as the waiting room for the Logan temple filled with people. Across the glass the work of baptisms continued without stopping. There were two witnesses and a recorder, as well as those lined up to go into the font and those waiting in white for their turn. On our side of the glass sat rows of people line up for their turn to enter the font room, while still others were busy getting white clothes to change into or to check in for their turn for the whole process.

Everything was in order and working efficiently. There was a lot of work being accomplished thanks to the sacrifices of everyone there.

As I watched that I pondered the other side of this process.

What is it like? Do they feel what we feel? Are they accepting what we are doing on their behalf?

It made me contemplate a little deeper what Joseph the Prophet meant when he said, in a letter to the Saints, “And now, my dearly beloved brethren and sisters, let me assure you that these are principles in relation to the dead and the living that cannot be lightly passed over, as pertaining to our salvation. For their salvation is necessary and essential to our salvation, as Paul says concerning the fathers—that they without us cannot be made perfect — neither can we without our dead be made perfect.”

It is easy to see, as we do their temple work, how “they without us cannot be made perfect”. But what does it mean that “neither can we without our dead be made perfect”?

And just what does it mean to be “made perfect”?

At one time, the Prophet Joseph spoke of the words of the Savior from the book of Matthew when he said, “Be ye therefore perfect, even as your Father in Heaven is perfect”. The Prophet related that the word “perfect” is better translated as “complete”.

“Be ye therefore complete, even as your Father in Heaven is complete”.

That changes things a bit, doesn’t it? Would it not apply as well if we think of the phrase as “they without us cannot be made complete, neither can we without our dead be made complete”.

Indeed, it makes more sense. The thought condenses the grand scope of it all and makes it easier to comprehend – at least for me.

“Where is the spirit world? It is right here. Do the good and evil spirits go together? Yes, they do. Do they both inhabit one kingdom? Yes, they do. Do they go to the sun? No. Do they go beyond the boundaries of the organized earth? No, they do not. It no doubt appears a singular idea to you that both Saint and sinner go to the same place and dwell together in the same world. You can see the same variety in this world. You see the Latter-day Saints, who have come into these valleys,—they are by themselves as a community, yet they are in the same world with other communities. When they are in the world of spirits, there is the Prophet and the Patriarch; all righteous men are there, and all wicked men also are there.”

What happens then when either the righteous or the wicked arrive in the afterlife? In other words, where is Grandma?

“The great misery of departed spirits in the world of spirits, where they go after death, is to know that they come short of the glory that others enjoy and that they might have enjoyed themselves, and they are their own accusers” (Joseph Smith)

In other words, they will see those who have a knowledge of the truth and who are free through the Atonement of Jesus Christ in that they are happy – and they will want that for themselves.

Jedidiah M. Grant was a member of the First Presidency, and still quite a young man, when he got very sick. If you recall he was the leading figure of the Mormon Reformation of 1856, a time when members of our own family took to rebaptism in elevating their commitment to the faith. Just days before he passed away, he had this experience of the “other side” as related by another member of the First Presidency from the time, Elder Heber C. Kimball:

“[Brother Grant] said to me, [Brother] Heber, I have been into the spirit world two nights in succession, and, of all the dreads that ever came across me, the worst was to have to again return to my body, though I had to do it. But O, says he, the order and government that were there! When in the spirit world, I saw the order of righteous men and women; beheld them organized in their several grades, and there appeared to be no obstruction to my vision; I could see every man and woman in their grade and order. I looked to see whether there was any disorder there, but there was none; neither could I see any death nor any darkness, disorder or confusion. He said that the people he there saw were organized in family capacities; and when he looked at them he saw grade after grade, and all were organized and in perfect harmony.”

That order that President Grant described is very similar to the order we see in the temple.

But if Grandma is there and part of this ordered effort to teach the Gospel, does she accept it?

This question was answered by several presidents of the Church, including Lorenzo Snow, who said:

“The great bulk of those who are in the spirit world for whom the work has been done will receive the truth. The conditions for the spirits of the dead receiving the testimony of Jesus in the spirit world are a thousand times more favorable than they are here in this life.”

Why? Because they lived here and live still. Perspective has changed. Circumstances have advanced.

In other words, yes, Grandma knows.

Interestingly, I found this story of the Logan temple that is now more than 70 years old:

“Elder Ballard sat at our baptismal font [in the Logan Utah Temple] one Saturday while nearly a thousand baptisms were performed for the dead. As he sat there, he contemplated on how great the temple ceremonies were, and how we are bringing special blessings to the living and the dead. His thoughts turned to the spirit world, and he wondered if the people there would accept the work we were doing for them.

“Brother Ballard said: ‘All at once a vision opened to me, and I beheld a great congregation of people gathered in the east end of the font room. One by one, as each name was baptized for, one of these people climbed a stairway over the font to the west end of the room. Not one soul was missing, but there was a person for every one of the thousand names done that day.’
“Brother Ballard said that he had never seen such happy people in all his life, and the whole congregation rejoiced at what was [being] done for them” – Nolan Porter Olsen, from the book, Logan Temple: The First 100 Years

The many things I have experienced in working on Family History so intently these past five years have taught me that our family is organized on the other side.

I have long told my wife how much I wish she had known and had met my Grandma Westover, and that they both would have enjoyed each other immensely. When Sandy’s grandmother died six years ago, I mused whether or not these two beloved grandmothers would meet on the other side.

I do not know that they have. But it would not surprise me in the least. That’s how connected our families are within the spirit world.

Sandy’s Mom this week had a dream of her mother. Due to its sacred nature I will only touch on it in passing here other than to say this is the first time since Grandma passed that my mother-in-law has seen her mother since she died.

Included in the names we did work for this week were several from my mother’s family. I knew none of them and I possess very little information about their lives.

But I left the temple feeling my Mom was aware this work was now done – and that a greater effort lies in the days ahead to further free her family there still in “spirit prison”.

This is how we are made complete or “made perfect”. This is how our dead help us.

Join us in the month of December in going to the Temple for our family.

We are challenging all members of the family, no matter where they live, to audit the temple work recorded at Family Search for any and all family members. Find a name a take it to the temple.

If you cannot find a name, then contact another family member you know who might hold names in reserve. I have dozens ready to go right now.

We are targeting December 3rd as our Westover Family Temple Day. But really it can happen at any time in December at any temple of your choosing.

Let’s end this year with a rush of names that we complete in the temple. Let’s give our family on the other side something to cheer. Then we can set fresh goals for the year ahead.

Family History through the Lens of the Temple