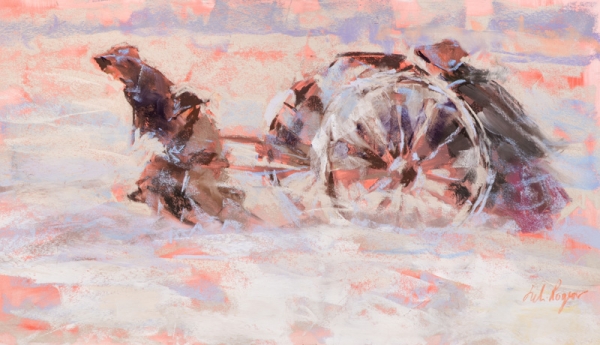 It is Pioneer Day weekend here in Utah. Each year around the 24th of July Utah pioneers are featured, celebrated and remembered.

We have many pioneer stories in our family history. To me one of the most compelling is the story of Grandma Sophie.

Grandma Sophie was not a Westover. Her granddaughter, Mary Ann Smith, married Arnold Westover, son of William and Ruth Westover.

Her story is part of many Westovers, however. And on this Pioneer Day we think it is important to share her pioneer experience.

Sophie was from Denmark. There she lived and married a man named Peter Pedersen. They had seven children together before a terrible disease took Peter’s life. This, of course, threw Sophie’s life into chaos. Death had already robbed her of two of her young children and now she found herself a widow.

In the days following his death Sophie grieved and dreamed a dream. In her dream she saw two men carrying suitcases and an angel in the dream told her the men were coming with a message for her from the Savior. Weeks later, as she hanging her laundry out on the line, she saw two men at a distance, both carrying suitcases. Instantly she recognized them from her dream. As they drew closer she rushed to them and asked, “What is it that Jesus wants me to know?”

This is where Sophie’s pioneer story begins.

These Mormon elders taught Sophie and baptized her and those children in her family who were old enough to join the Church. As she accepted her Church membership she was promised that if she stayed faithful she would have the privilege of shaking hands with a prophet of God.

She moved and sold her property, preparing her family as many other Mormons did to “come to Zion” in America. With her five remaining children, all of them very young, she boarded the ship Thornton on May 4th, 1856.

Immediately tragedy struck for Sophie. Her 8 year old son Thomas fell from an upper deck and broke his neck, killing him almost instantly. He was buried at sea.

After arriving in the United States the company she was traveling with became the Willie Handcart Company — and already you know much of the rest of her story.

Oddly enough, of all the tales told of members of that company Sophie’s story is relatively unknown. But her situation was just as desperate and the outcome, for her and for her remaining four children, was just as big a miracle. She experienced it all and with her children survived the trial.

Sophie survived by selling her precious things for items needed for survival. At one point, as food grew scarce, she traded her wedding bands for venison, hiding the meat inside her blouse. The family had their own handcart, powered mostly by Sophie and her ten year old son, Peter. Walking were daughters Emma, age 6 and Hannah, age 4. Three year old Otto was pulled along in the handcart with their belongings.

After arriving in Salt Lake in November of 1856, Sophie and family were taken in by Salt Lake City saints, like most of the other Willie Company pioneers. They were at this point completely destitute of means and spoke very little English.

She was assigned and traveled to Manti in the winter of 1857. On one of her first nights there in that valley she attended a meeting presided over by President Heber C. Kimball. Also attending that meeting was a man who joined the other Manti saints who had gathered for the occasion. His name was Albert Smith.

President Kimball very plainly told the story of those Danish pioneers who had been relocated to Manti. He explained that many of the women of those fall companies were left widowed and they needed volunteers to take them on.

Albert had already had one experience with plural marriage and it wasn’t a good one. He was hesitant to do it again. However, feeling compelled by the Spirit, he raised his hand to help. Albert was then introduced to Sophie. She didn’t speak English and he didn’t speak Danish.

Neither did President Kimball. However, as Heber C. Kimball walked down the aisle of the hall he passed Sophie and then stopped, returned to her and shook her hand. Speaking in English he said, “The Lord is well pleased with you.” Somehow both Heber and Sophie were able to understand each other during this brief but memorable conversation. In later years Sophie would testify that the promise of the elders who baptized her were fulfilled in that meeting when she shook hands with Heber C. Kimball, a member of the First Presidency, an Apostle and a prophet of God.

A short time later Sophie traveled again to Salt Lake, this time with Albert. There they went to the Endowment House and were sealed.

And there the pioneer story of Grandma Sophie really begins. She lived until 1898 and over the more than 40 years she lived in Manti as Sister Sophie Smith she completed a story of love and service that should never be forgotten. She became beloved to Albert, who had many children from earlier relationships and who carried a burden in the community as a farmer, a builder and whose home was a social center for the pioneer community.

Her story overlapped the impressive pioneer story of her husband Albert, who joined the Church and traveled to Nauvoo as a younger man. He later became a member of the Mormon Battalion. Both Sophie and Albert were united by their common testimony of Mormonism and the principles of love it taught was practiced by each in their relationship and their home.

Albert left a detailed journal of his pioneering experience. Sophie did not but she told her stories to her children, the children she bore to Albert Smith, and to their grandchildren. A simple Google search now results in access to different versions of her story passed down through various lines of her family. In fact, these stories have proliferated online over the past five years as more and more family history work has been compiled from different branches of the family. Each story brings a little more detail to the life and service of Grandma Sophie.

I personally learned of Grandma Sophie just four years ago as I was researching her as part of our involvement in an LDS trek re-enactment. As I immersed myself in the study of the Willie Handcart Company and especially when I visited the site of Rocky Ridge, Wyoming — a site of one of the critical nights of the Willie Handcart Company experience — I had one of those spiritual experiences that can only come from doing family history.

I felt her presence there — with me, one of her many grandsons. It was a soft, reassuring confirmation that she was there and made that sacrifice not only for her family but for her conviction. It was as real an experience as I have ever had and I consider it a very sacred moment.

It taught me that even though many of my pioneer ancestors lived their lives with devotion and had no need for my efforts in doing temple work on their behalf that they had testimonies to share with me that would prove of value to me in my day.

That experience changed my life. Now as I work to learn the pioneering stories of every generation on every side of our family history it is with grateful appreciation that I seek them out. I know that in a coming day I will be able to look them in the eye, hear their voices and feel their embrace. I want to know them before I get there.