Whenever King Harald “Bluetooth” Gormsson makes the news I take notice. Old Bluetooth was a Norse King who lived more than 1,000 years ago. He is my 34th great-grandfather.

Our connection to King Harald comes via the Rowe line. I’ve outlined my direct descendancy in this post from more than 3 years ago.

His nickname, Bluetooth, comes from a distinguishing feature – likely a dead tooth – that he most famously displayed in battle. Both his friends and enemies referred to King Harald as “Bluetooth”. 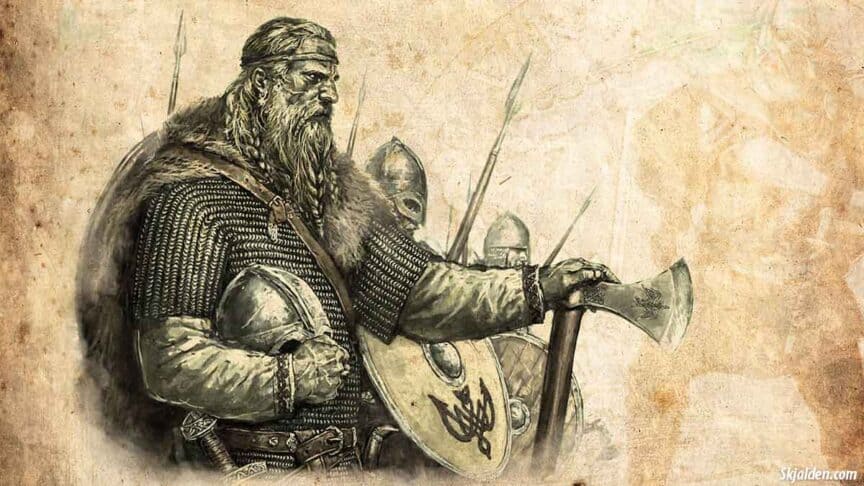 This technology is named after our King Harald because he is credited with bringing Christianity to the Northern European countries of Denmark and Norway – thus uniting them in faith (so, you could say wirelessly). He was one very talented Norse King.

As a direct descendant, I jokingly tell people that every time they use Bluetooth for anything they owe me a nickel. If I can’t inherit the King’s castle, or even his Viking ship, at least allow me to collect, um, royalties.

All joking aside, the story of King Harald is one we haven’t told completely. It’s time we rectify that somewhat. After all, he was never supposed to be the King.

~ How Harald Become the King ~

Harald was born the 2nd son of Gorm the Old, who was a Norse King that ruled from 936 until around the year 958.

Gorm the Old, and his wife, the queen, Thrya, had three sons – our Harald being the middle of the three.

(This history is a hyper-condensed version of the common story told about King Harald on the Internet. There are many variations of this story and, being 1000+ years old, who knows what the absolute truth is. Regardless, it’s a good story and one we welcome arguments about and discussion of it).

The oldest of the three boys was named Canute, a literal fair-haired boy, quite beloved by King Gorm. From early on it was widely known that Canute would inherit the Kingdom.

Harald, then, was destined to a life of living in his brother’s shadow – close to the throne but never intended for it. His inheritance was given to him before his father died – a fleet of Viking ships that Harald used to raid and pillage.

Raiding and pillaging was what Danish princes did while they awaited their ascendency to the throne and evidently Canute and his brother Harald were good at it – competitive even.

Each year at Christmastime the boys and their ships would venture home to celebrate the season with their parents.

It was during one of these Yuletide return-to-home seasons that Canute and Harald’s fleets clashed at sea and, as a result, Canute died in battle.

Harald knew this presented more than the usual holiday family tension. He had heard, as had most in the circle of King Gorm the Old, that the bearer of the bad news of the passing of Canute would himself or herself be put to death.

(King Gorm supposedly converted to Christianity, or so King Harald would have us believe from his history. Perhaps this all happened early on in that process).

Anyway, Harald arrived that Christmas knowing he was now the new heir to the throne but he wasn’t exactly eager to share the news. So he decided to first tell his mother, Queen Thyra, thinking she would be the one to tell the King.

According to Wikipedia, Queen Thyra had a clever plan to share the news that would send the message but spare her life.

She ordered the royal hall hung with black cloth and that no one was to say a single word.

When Gorm entered the hall, he was astonished and asked what the mourning colors meant.

Queen Thyra spoke up: “Lord King, you had two falcons, one white and the other gray. The white one flew far afield and was set upon by other birds which tore off its beautiful feathers and is now useless to you. Meanwhile, the gray falcon continues to catch fowl for the king’s table.”

Gorm understood immediately the Queen’s metaphor and cried out, “My son is surely dead, since all of Denmark mourns!”

“You have said it, your majesty,” Thyra announced.

King Gorm the Old so mourned his son he died the next day, no doubt dampening the festive Christmas spirits of all the family assembled.

So Harald became the King.

He too converted to Christianity, perhaps some time after both his parents had passed away, because he had his parent’s bodies exhumed and given a Christian burial in the church cemetery near the town of his birth. 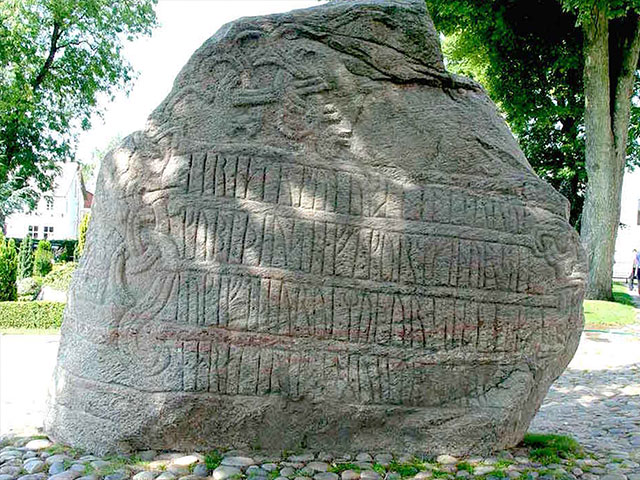 ~ Why King Harald is in the News ~

King Harald is known all over Europe. He made it a point when he reburied his parents in Jelling, Demark, to install what is called The Jelling Stones, where the history of his royal parents is carved in runic etchings.

But even after honoring his parents with a Christian burial and doing his family history in stone, the exploits of King Harald are documented all over northern and western Europe.

This story in today’s news (July 31, 2022) tells of competing theories of modern historians tracing artifacts that point to Poland as a possible burial ground for King Harald.

It’s a great story – regardless of which theory you believe – and, as these things go, it likely doesn’t matter if King Harald had a pagan or a Christian burial in Poland.

The simple fact remains that he is dead and has been so for 1000 years. The fact he was king, that his legacy is the spread of Christianity and that he was legendary in his exploits as a bold, opinionated man means he’s definitely one of us. Family, indeed.

I will collect and learn of the many histories written of him. I know we will never arrive at the full truth of who he truly was as a man until we get to the other side and can ask him alone.

Until then, we can enjoy his modern fame. We can tell our children and grandchildren what we know of this ancient grandfather.

And we can all enjoy yet another fascinating individual from our family history. 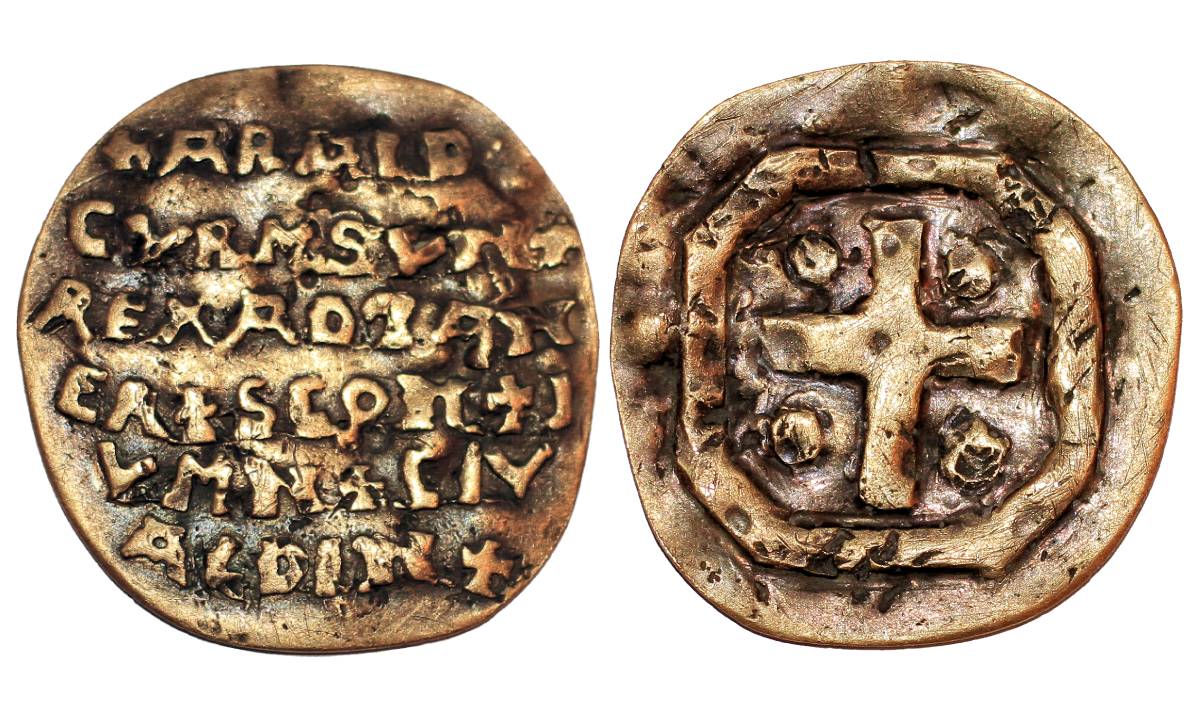 The Curmsun Disc has a fascinating story – it appeared in Sweden in 2014, but some scholars believe it was originally part of a Viking hoard found by Heinrich Boldt, a young boy from Germany, in 1841 near the island of Wolin, which was a part of Germany at the time.

The disc was found during the construction of a church, which stands to this day. It was built in Wiejkowo, 3 kilometers away from the modern town of Wolin, on the remains of an older medieval chapel.

Swedish archaeologist Sven Rosborn claims the entrance to the crypt was discovered by accident by Boldt, who was playing with other children on the construction site.

Read more at The Viking Herald

The Value in Re-Plowing Old Ground