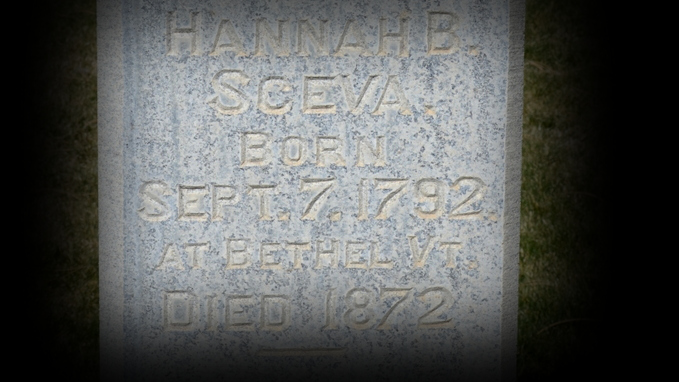 The stories from our family history below showcase this as well.

~ The Beals and the Westovers ~

Obediah and Rebecca Beal were married at the end of the American Revolution. They would go on to have a family of six children – five girls and a boy.

While Obediah and Rebecca were both born and raised in small communities near Massachusetts Bay their married life would take them towards a frontier in Vermont where all of their children were born.

Polly, Hannah, Sally and Daniel were all born in Bethel, Vermont.

In 1802, when Electa Beal was born, the family was further north in a village called Bristol.

Four years later a final daughter, named Laura, was born in Berkshire, Vermont – a tiny village on the U.S.-Canadian border.

This travelogue of the Beal family is significant because it puts them in very close proximity to the traveling Amos Westover family.

Amos and Ruth Westover, of Sheffield, Massachusetts, found themselves in Canada just beyond the border after the American Revolution.

Amos was looking for land and had followed a few of his older brothers in seeking a land grant from the King in Canada.

Between the years 1790 and 1811, Amos and Ruth moved their family several times – and had several children along the way – all within about 50 miles or so of the Beal family.

While there is no proof the families knew each other while in Vermont it is a fact that both the Beals and the Westovers ended up very close to each other in Ohio years later.

The Beal and Westover families stayed settled in Ohio for the most part for about 20 years.

Obediah, Amos and Ruth all died and were buried there in 1822. Rebecca would live until 1844 and appears to have stayed near eldest daughter Polly for the rest of her life. Each of the Beal children married but were not far away from each other during these years.

When Electa’s husband Alexander unexpectedly died in 1834 she turned first to her family for help as she struggled with the family farm in Goshen and three young boys – Edwin, Charles and Oscar.

~ Conversion and the Trek West ~

Hannah Beal married a man named George Washington Brown in 1811. The Browns had two children, both daughters – Adeline and Sophia.

There was no small amount of trauma for Hannah during these years of the late 1830s and 1840s. Her daughter Adeline married in 1835 and made Hannah a grandmother in 1837. But within a few years both Hannah and Adeline lost their husbands.

In 1844, Hannah was taught by Mormon elders and converted, along with her daughter Adeline.

Hannah urged the elders to visit her family in neighboring counties. There they found a searching Electa, who at this time was trying to help her eldest son, Edwin, get through the death of his young wife and helping to care for her first grandchild.

When the decision was made to join the Saints in Utah, Hannah ventured west sometime between 1848 and 1850.

Perhaps she came at the insistence of her sister, Electa.

Electa and her boys and grandson were part of the large company that came west with Brigham Young in 1848.

By the early 1850 the records of Electa and Hannah clearly show them as being in Utah – Electa, in Salt Lake City, and Hannah out in Grantsville living with Adeline and her husband Aaron Sceva.

What records we can find confirm that “Aunt Hannah” was the family leader in Utah. Before Edwin and his families were called to the Cotton Mission in Southern Utah it was with Aunt Hannah where they were farming.

We have accounted before how the years of 1856-57 were significant for the family during what is called the Mormon Reformation.

Plural marriage changed the lives not only of the men, but also of the Beal sisters who were grandmothers.

Hannah became the plural wife of Aaron Sceva – that’s right, her own daughter’s husband. This was actually not an unheard of arrangement. Church leaders frequently advised well-established men to marry widowed and unmarried women in order to help support them.

Electa Beal also took to marrying again during these years. Her new husband, like Hannah’s husband, was a prominent figure in their communities and within the Church. In 1849 she married Eleazar Miller, one of the men who had baptized Brigham Young way back in the 1830s.

Brigham, of course, knew all about the Westover family. In letters exchanged between Brigham and Eleazar in 1850 he inquired after “the new Mrs. Miller”. Electa, however, chose to stay close to her sons and never lived with Eleazar Miller. There is some indication as well that later Electa married a man named Chauncey Loveland – but as before, she never lived with him either.

Within 2 years another sister – the youngest of the Beal sisters, Laura Adaline Beal– would venture to Utah.
Laura’s story is a little unique. In 1844 when Rebecca Beal died she gave all she had to her youngest child, Laura.

When Laura was small child she suffered from an accident that put scissors through one eye, blinding her in that eye. Her history states that soon her other eye “faded in sympathy”, rendering Laura completely blind.

While there she was given a copy of the Bible published just for the blind, which took up several volumes and had become her prized possession. 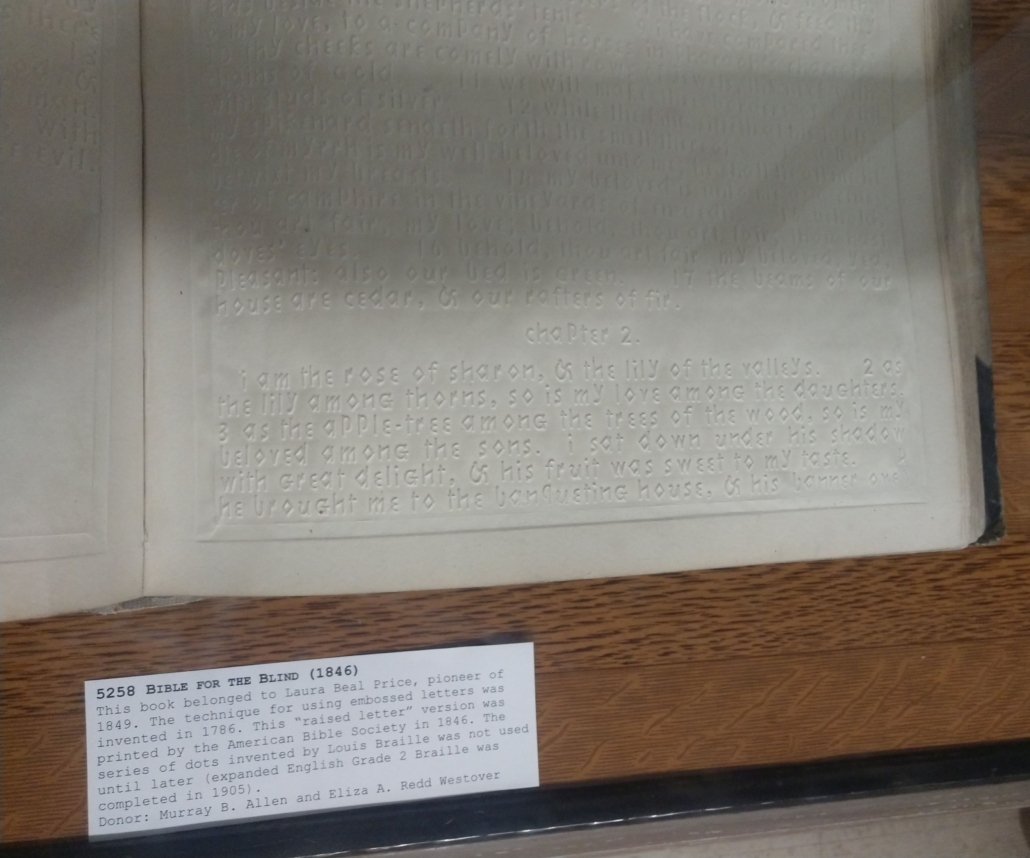 It was not in Braille, as that had not been invented yet, but it featured large raised letters that could be read by touch.

Laura was also known for her spiritual sensitivities. Her love for the Bible and her ability to independently study it gave her amazing story-telling skills. Children later in life were reportedly spell bound by Laura’s retelling of Bible stories.

A missionary from Utah visited where Laura was living near Cincinnati in 1850, telling her that he knew her two sisters who had joined the Church and moved to Utah. His efforts to teach her the gospel were enough to get Laura to head west with him and his wife to Utah, even though she was not a member of the Church.

He continued his missionary efforts, drawing on Laura’s love of the Bible. While in route Laura fell ill but had enough faith to ask the elders for a blessing. She ended up requesting baptism while on her way west.

After arriving in Utah she became the plural wife of a man named John Price. It was not a good situation for her, however, and within two years she found herself in an abusive situation that had robbed her of the money given to her by her mother years before. On the advice of her Bishop, she contacted Brigham Young for a bill of divorcement, which was granted.

From there Laura headed to Grantsville to her sister Hannah’s home. It was there she began to build her legendary status as “Aunt Laura”.

From that point forward in her life Laura stayed with family she knew. For a while she was with Hannah, then she joined Electa in Southern Utah for a while. In later years, she lived with a daughter of Edwin’s in Hamblin, Utah where she eventually died and was buried.

Aunt Laura was noted for a couple of peculiarities. She was very independent and insisted on caring for herself and helping around the home. Most children were fascinated by her because of all she could do and how well she would engage them.

Laura’s history concedes to one “bad habit” Laura had picked up years before she came to Utah – she smoked a pipe. She battled for years to conquer the habit in efforts to keep the Word of Wisdom and her history notes she got it down to just a once-an-evening indulgence. Like everything she did this was done according to a well-established pattern. Frequently the children would be pressed into service to help her light the pipe.

Laura’s church activity was forever steady and when the St. George Temple was dedicated she was there, with her sister Electa as a fellow temple worker, and she participated in doing temple work for their family members back in Ohio.

Hannah, Electa, and Laura each had their individual stories of coming to Zion and working out the salvation for their loved ones. Each of them was faithful. Each of them was a powerful example and doggedly devoted to the family. They cared for each other and honored their parents.

Hannah is buried in Grantsville. Electa is in Washington City, near St. George. And Laura rests in the Hamblin cemetery.