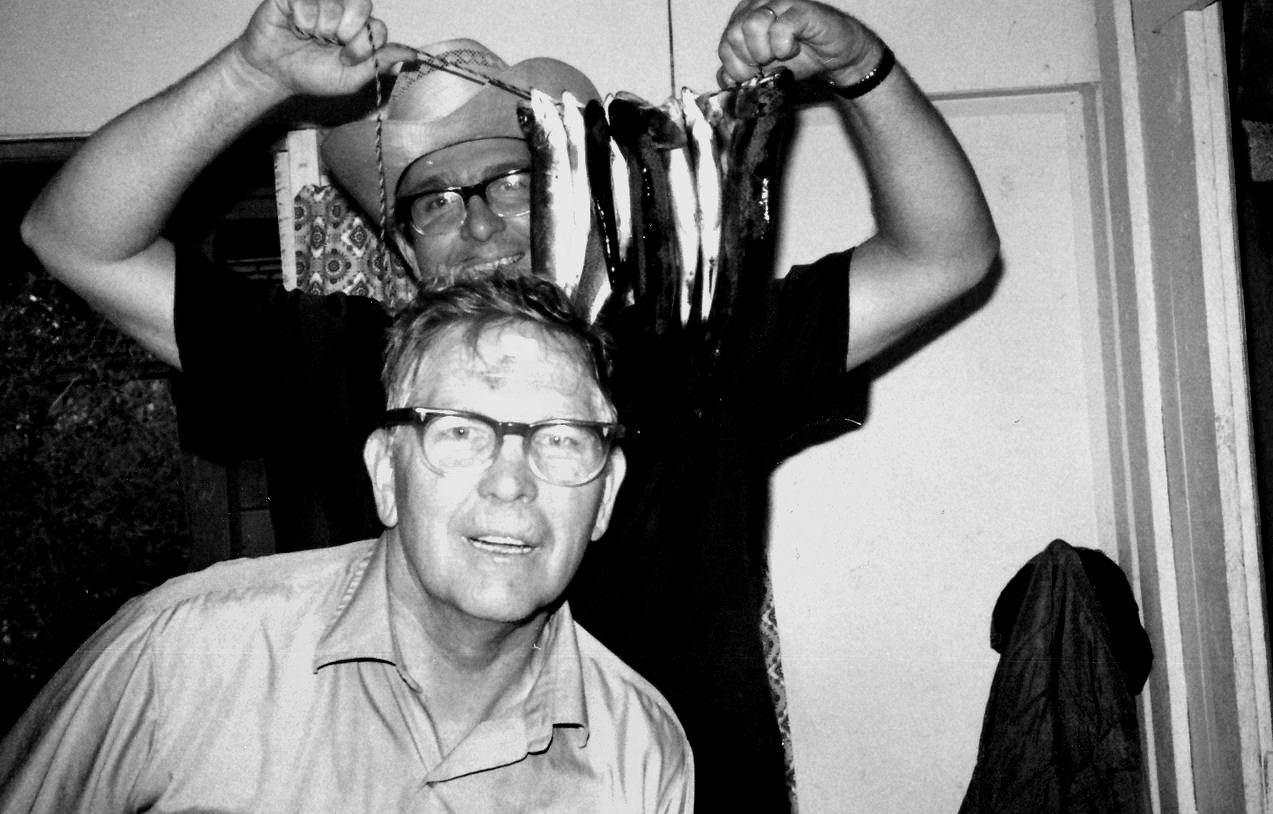 I had hoped by now to have more of his personal history compiled. In the absence of that, I would hope that you would log in and spend some time looking over the Leon A. Westover Collection of photos and by reading the ongoing project that is the history of my grandmother, Maurine R. Westover.

Grandpa was a complex man. I think in many respects he was misunderstood. Of course, I speak of him from the perspective of a grandchild. I have just my own memories and those shared with me to fully evaluate his life.

I suppose you’re wondering what the story is of the picture posted above and why I chose that image to accompany this post. Why didn’t I use the image of him in his classroom or the image of him as a missionary or young married father? I guess because the picture here shows the perspective of a child — I’m guessing one of us kids shot this picture, since my Dad is the one holding all the fish — and because it shows Grandpa photobombing the shot long before that was a term. Grandpa could kid around and have fun. He was a relentless tease. Things like that don’t get talked about much in histories.

He was part of that Greatest Generation we so often hold up in admiration and respect. His story is a little different than most but it is worthy of review and respect. When you consider where he came from and what he accomplished his was truly an incredible life.

I have many enduring memories of Grandpa. He and I would talk baseball frequently. We shared a love of history. And he tried his best to convince me, while yet a teen, that computers were worthy of my time and attention and could be a future pursuit. My Dad would sometimes joke about his father’s ability to see the future but on the computer Grandpa had it all exactly right. He was ahead of his time.

But if I had to recall one particular topic most consistent in my conversations with Grandpa it would be family. He spoke of it often. He admired those he was related to and he cherished his heritage. The Westover Ranch was very important to him and for a child who never even visited the ranch when I was younger he certainly made an impression upon me about it. So much so that when given the opportunity to provide a little service and contribution to the ranch in recent years it has been mostly out of love and respect for him that I’ve gladly done so. I know on these things I have his approval and encouragement.

As I have aged I have come to appreciate Grandpa more. After all, I knew him from about the age I now am until he died. In years it isn’t long. But it was long enough to make me admire him and to love him greatly.

I am hoping during this 100th year of the anniversary of his birth we accomplish more on this site to archive the details of his life. Grandma has done a great job of telling us so much but how wonderful it would be to find whatever record that Grandpa left behind.

For my children I would tell you this: get to know Leon A. Westover. He wasn’t a perfect man. He was a great example of a man who always tried, who was faithful to the ideals he was taught by parents who raised him through no small amount of adversity. He lived a young teen life during the Great Depression and with great faith brought forth a young family. He served — relentlessly. He worked multiple jobs for years at a time and even in later years sacrificed his resources for the sake of his children and grand children. He served a mission early in life — and another late in life. He embraced the value of education and instilled that in each of his children, a fact I know he was proud of. He was the first of his family to graduate from college.

There is much from him to be learned.

In the coming year I am hoping we get the contributions of others who knew him to help write his story for his grandchildren and great grandchildren to enjoy.

Happy birthday, Grandpa. We love you.

Telling Your Own Story