The “Albert Smith Project”, as I’ve come to call it, has yielded so much interesting information there is just no way to include it all in the upcoming video.

Some of it is so compelling that I still feel a need to share it – including this story here.

Father Smith, as the citizens of Manti came to know him, was of the same generation and age as Electa Westover. He connects into the Westover line through the marriage of his granddaughter, Mary Ann Smith, to Arnold Westover in 1914.

In advance of the building of the Manti Temple Albert Smith paid a genealogist to find the names of his ancestors. This was way back in 1878, right around the time plans for a temple in Manti were announced.

It took years but when the names finally arrived Albert was pleased. The first was a batch of 400 names. Over the years as the dedication of the temple approached in 1888 Albert would eventually take more than 1400 ancestor names to the temple.

Albert was thrilled to learn of his heritage – especially now that he could recount it directly back to the Mayflower.

I can now count 11 direct ancestors on my family tree who were on the Mayflower. Among them are my 9th great-grandparents, John and Priscilla Alden – ancestors we share directly with Albert Smith.

Living in the relative isolated wilderness of Manti there is no doubting the need Albert had to pay someone to travel east to learn his genealogy in the late 19th century. He simply would not have had any way to locally do that research.

But he recognized right away the name of John Alden.

How could that be?

Perhaps it was through the work of Henry Wadsworth Longfellow, a popular American poet of Albert’s time.

Longfellow is still known to many for his great works, including the touching story of the beloved hymn, I Heard the Bells on Christmas Day, based on his poem “Christmas Bells”. His poems sometimes told great stories, including Evangeline and The Song of Hiawatha. 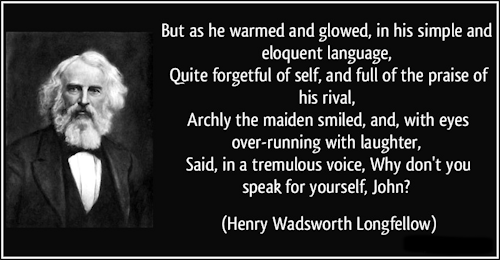 Historians to this day debate whether the story told by Longfellow of his grandparents is fact or fiction. Another descendant of the John Alden, Timothy Alden, first told the story of the Pilgrim love triangle in his book American Epitaphs in 1814.

The story would become famous with Longfellow’s “epic poem” of the tale, a story he loved and struggled with for more than two years to write.

After it was published, Longfellow famously said of the story in 1858 “…it is always disagreeable when the glow of composition is over, to criticize what one has been in love with…”

In the poem, Plymouth’s military leader, Myles Standish, asks John Alden to court Priscilla Mullins on his behalf. This causes John to be torn between faithfulness to his “captain” and the longings of his own heart.

Of course, as the tale is skillfully woven, John and Priscilla fall in love and the dilemma reaches a climax as Priscilla famously mused, “Why don’t you speak for yourself, John?”

Longfellow’s attempt to balance a romanticized view of Puritan values and culture with an epic exaggeration of Standish’s heroism and exploits captured the imagination of American readers in the 19th century and made household names of John and Priscilla.

It is interesting to note the cultural impact the story would have on American history.

Longfellow’s poem came just a few years after the discovery of William Bradford’s written history of Plymouth Colony in 1854.

The poem was released just in advance of the Civil War, a time when holidays such as Christmas and Thanksgiving were just gaining a foothold in American cultural tradition as national observances.

Bradford’s history, coupled with Longfellow’s The Courtship of Miles Standish, advanced the recognition of Thanksgiving as a national holiday, although it had been celebrated in New England since the mid-1600s.

So popular was the poem in the 1860s, after Lincoln’s recognition of a national day of Thanksgiving, it became a fad of sorts to lay claim to pilgrim ancestry.

Northerners in particular — Yankees like Albert Smith — were thrilled to celebrate national history that was not centered in Virginia and as the nation recovered from the war their Victorian sensibilities were enamored with the Puritan ideals of moral rectitude, fair mindedness and hard work.

To claim an ancestor on the Mayflower somehow made one more American.

Albert Smith’s mother was an Alden – but that fact was never once mentioned by Albert as anything important until the 1880s – when it was perhaps more culturally relevant.

Whether the love story of John and Priscilla is true or not matters little now. Without them, without Longfellow, we have a little less known about America, about life as pilgrims and about all we celebrate at Thanksgiving.

I believe I will hold in reserve now the telling of this story – and the reading of The Courtship of Miles Standish – as a new Thanksgiving tradition in my home.

It is, after all, all about family. 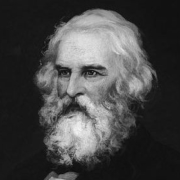 The Deacon of Killingworth
0 replies