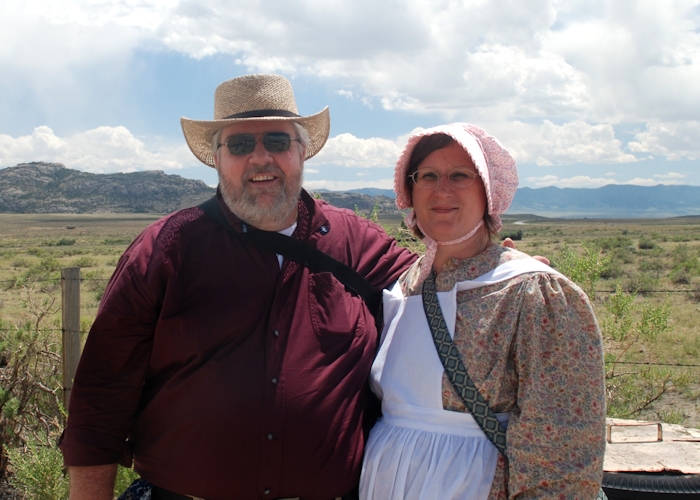 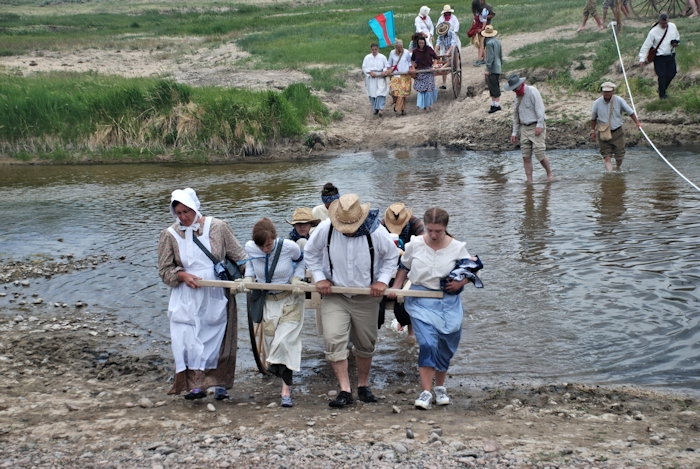 I noticed on Facebook that members of the Stake we used to live in are once again headed to Wyoming for Trek.

Trek is a re-enactment of the Mormon Pioneer trail. For a period of three to five days large groups of mostly youth and the adult leaders head to Martin’s Cove, Wyoming to camp and walk the trail.

The place is sacred to Latter-day Saints. It was at Martin’s Cove where the Martin Handcart Company spent their critical hours.

I have to admit that I felt a bit envious of those I see this week dressed in pioneer clothing heading out for the trail.
And that is an astonishing statement only because I really had a miserable time.

Our first day of Trek began long before sunlight as we dressed and packed our allotted 17 pounds of gear. We met at the Church for a devotional, where prayers were said and blessings were given. I recall how serious our good Stake President was as he stood there – the only one in the chapel in a suit – and promised that we would have a spiritual experience.

For me that was a foregone conclusion.

In my calling for Trek I had spent months in preparation for my role. I was to be a storyteller and a witness and I was encouraged to tell the stories of my family if I had them.

For me those months in early 2013 were filled with spirit and revelation.

Understand that these people I was studying were not ancestors in need of my efforts in their behalf in the Temple.

These were people who had gained their own testimonies and had performed ordinance work for themselves.

I hardly knew anything about them or their trek before this experience began.

But I was determined to tell their stories on Trek – no matter what it would take. And it would take a lot — at least for me.

It began with a long bus ride – a long HOT bus ride as the vehicle we were in had no air conditioning. It was so hot that I’m convinced many on the bus were dehydrated before we set foot in Wyoming.

As we got off the bus, they handed us a bottle of water and told us to drink. We held a meeting where we were warned of the dangers of the area – snakes and critters and such.

But worst of all were the elements and unlike the pioneers, who were nowhere near Wyoming in late June, we were prone to sun burn, heat stroke and dehydration. Yes, we were told, people like us who came on Trek actually died because they simply were not hydrated enough.

With those cheery warnings in our ears we began putting our things into the handcarts and we pushed off onto the trail.

It was only a few miles but for this overweight, middle-aged, sedentary man it was a struggle.

My head pounded, I was short on breath, red in the head and everyone kept looking back on me as I fell further and further behind. 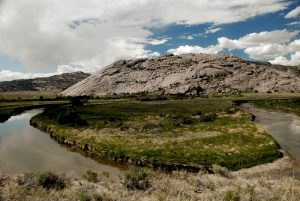 We stopped midway to our destination to rehydrate and use the restrooms and more than one concerned individual pulled me aside to ask how I was doing and whether or not I was physically up to the task at hand.

The answer was clearly no. I was not up to it.

But for as awful as I felt and for as worried as I was about what the next few days would be like for me I could not escape the thoughts of my ancestors who had done this for real.

In my studies I learned that we in our generation make far more of the ordeal across the plains than they did.
For many, it was four to six months out of their lives – a mere moment in time for lives that were spent facing so many grueling challenges.

Well, I’m not going to lie.

The next couple of days were completely beyond my physical abilities and I struggled through every step of it.

So why do I look with envy upon those headed out for that experience this week?

It is because Trek was so much more than those three days in the hot sun.

It was months of study and discovery. It was just a few important moments of storytelling and testifying. And it was a sobering period of pondering and reflection as I walked where they walked. 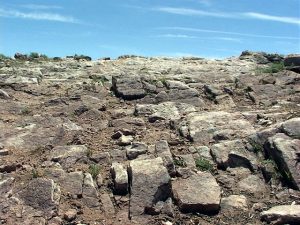 On the final day of our journey we went to Rocky Ridge, a place where the Willie Handcart Company spent a critical night.

For us, in June, there was beauty about the place. There was some green to it, even among all the rocks and boulders.

But for them it had to be awful. When they arrived at this place it was dark and freezing. The snow was ten inches deep.

It is simply a hard, miserable place. 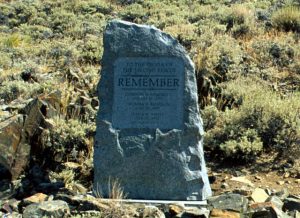 As we walked to the gathering point – a small meadow with logs for benches – we passed a memorial put up by the First Presidency where the simple word REMEMBER stands out.

For me, it was already a special place because I knew the story of Grandma Sophie.

In all the books I read about the Willie Handcart Company I was always able to find the names of Sophie and her children. But never could I find her story. Luckily, I learned it from published accounts on Family Search.

Sophie’s story only grew more compelling after her trek was over but I was certain that within the pages of the journal of Albert Smith I might find some detail of what she endured.

But all he said was that she was a member of the Willie Handcart Company and had “passed through many hardships”.

So while I knew that Grandma Sophie was there and I knew how the rest of her story turned out I really hadn’t learned what a miracle her trek experience really was – until I pondered her situation while at Rocky Ridge.

As we sat in that devotional and sang some of the songs of Zion I never felt the wind there stop or diminish. The sun was beating down on us and it was hot – uncomfortably so.

But in my mind’s eye I could see how cold and harsh of a place Rocky Ridge is – and it has to be a hundred times more miserable in a winter’s storm. If there is an end to earth it is at Rocky Ridge.

There are no flat surfaces in that place – no place to pitch a tent. Obviously there is no food, no water, and none of comforts of natural things like trees or brush. There are no natural shelters and there is no protection from the wind.

As I sat there in this stark place – and tried to remember – I felt a rush of revelation fill my head.

I FELT the presence of Grandma Sophie, even though I had never met her.

It was a burning witness like none I have ever had in my life. And it told me that yes, she had indeed been there and that yes, I was her grandson.

As simple as that sounds it was a powerful, sobering moment for me.

Sophie had endured so much. In 1853 she lost her husband, Peder, who was only 37 or so. Together they had brought 8 children into the world and within three years only 4 of them had survived to be with her in the terrible place of Rocky Ridge.

My thoughts there began by wondering what did Sophie think on the night she was in this place?

As I thought all these terribly sad thoughts the rush of warmth came over me and I felt her there. And what came to my mind wasn’t the detail of how harsh this place is or how terrible the trial was that Sophie endured or how miserable my weak efforts had been for just a couple of days on Trek.

No, what came to me was that all of that was secondary to just one thing. And that thing was faith.

When they say that we cannot be saved without our dead I believe it is moments like these that make that true.

I believe I was given a witness that night from this beloved ancestor.

And that’s what makes me envious of those folks out on the trail tonight as I write this.

Of course, you don’t have to go on Trek to have these experiences.

But for me Trek introduced these experiences to me on many levels. And I have had other such experiences over the past four years.

It has been life changing for me.

Where I am now is not where I thought I would be four years ago. And where I am going in the years ahead was not even on my radar then.

We have over the course of four years created a lot of family history on our own. One child has married, two grandchildren have come, and now only two of my children remain at home. So very much has changed.

I’m on a new Trek now. And in a little bit like Sophie, I’m not sure how this all ends up.

Well — in the long term.

But it makes me wonder if in some distant day I will be someone’s ancestor and I will have the chance to give a witness to a grandchild.

Something tells me yes, I will. It is part of our trek.

A Story of Trek
0 replies