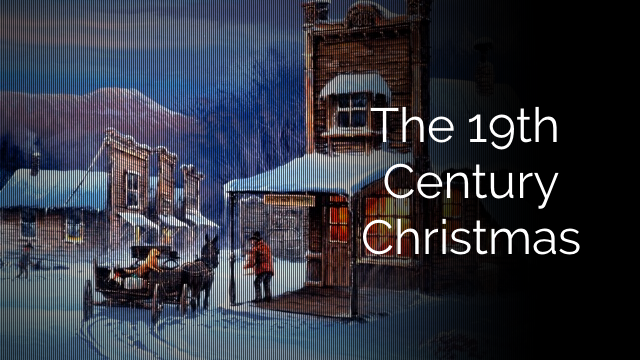 Historians tell us that Christmas in the United States and even the world was not celebrated much prior to Charles Dickens. They claim that the Puritans of Boston banned it and that it was “quite dead” in England of the 18th century.

That is all false.

While some evidence suggests Christmas was quite different it was not the fragmentary thing they made it out to be in America.

In fact, if anything was out of the usual when it came to Christmas it was the Puritan attitude about it. But the Puritans honestly never had a chance with their ban of Christmas.

Christmas was just too big even before they started.

The history of Christmas in the Americas dates back at least to the 14th century French explorers who first came to Canada. They did not record much of their activities however they did make a record of their Christmas celebrations in a strange land.

Columbus, too, made Christmas an event, even going so far as to name his first settlement in what we now call Cuba, La Navidad.

Of course, Columbus didn’t share his sacred Christmas with the natives and he allowed his own men to run wild. When Columbus returned the following year he found all his men dead and La Navidad burned beyond recognition. Columbus later took a more humble approach to teaching Christmas to later natives he discovered.

When the pilgrims of Jamestown arrived it was none other than John Smith who went on record as the first to drink eggnog at Christmas in the New World in 1607. The Jamestown record of Christmas celebration clearly pre-dates the Puritan ban.

Even in New England, outside of Puritan Boston, Christmas was widely observed. Newsprint clippings from the 1600s and 1700s shows Christmas recipes shared, poetry published and goods sold in association with Christmas.

In fact, old newspapers and family journals clearly show a culture where Christmas in one form or another was already a tradition that was passed for generations long before our ancestors of the 19th century came along.

What transpired culturally with Christmas in America only made it bigger as the 19th century advanced.

In New York City, by the late 1790s already a melting pot of nationalities, the secular Christmas in all of its raucous tradition was wildly celebrated.

The cultured and educated of the city fought to do something about it.

For years, spurred through the writings of Washington Irving, a man named John Pintard took up the challenge of taming the Christmas chaos in New York.

He did it by appealing to a common figure among all the immigrant groups of the city – St. Nicholas.

The true story of St. Nicholas (this historical figure, not the legendary Santa Claus he later became) is another that historians tend to gloss over.

Nicholas was a real person. He was a spiritual man, a bishop and a legendary figure in his time. He was one of those in attendance at the Council of Nicea and was a fervent backer of the Divinity of Christ.

In fact, it was there that Nicholas came to blows with a critic and was thrown into prison, only to be freed, it is said, by Jesus Christ, who returned to him his red priestly robes.

By the close of his life Nicholas was famous in many areas of the world, second only to Christ in terms of his fame. Within a few hundred years of his lifetime more than 2000 churches of the Old World would bear his name.

How did this happen in a world without Internet or media?

Nicholas’ exploits and some say miracles were carried by word of mouth. They were taught, as part of the Christmas season, in many lands.

Nicholas, long after he died, became known in many cultures and, due to his charity and his December 6th feast day, became associated with Christmas.

For Pintard in New York around the turn of the 19th century, Nicholas became the focal point of a more tame Christmas celebration.

He opened a museum of Nicholas history, drawing upon the Nicholas-themed traditions of every culture he could find.

He also used the literary market to great advantage by convincing popular writers such as Washington Irving to create works featuring St. Nicholas and Christmas. One of Washington
Irving’s associates was a wealthy professor of theology and religion named Clement Clark Moore.

Moore and his wife had a large family and, as the story goes, as he was delivering Christmas turkeys to the poor on a snowy Christmas Eve he penned a fun little poem about St. Nicholas based on the jolly demeanor of his white bearded sleigh driver.

Moore later shared his “Visit from St. Nicholas” with his many children, who were delighted.

The poem first became a family tradition of Christmas and later Moore had it published, anonymously in a New York newspaper, in 1823.

As was the tradition in those days, the poem passed from one paper to the next and was shared over time around the country. It became a media tradition of Christmas to share it every year.

Combine the image of Moore’s Santa Claus with Dicken’s resurgent embrace of Christmas with A Christmas Carol and you have the cultural fuel that made Christmas what it has become in America.

By the time our pioneer ancestors crossed the plains in the late 1840s they had, regardless of their land of origin, established traditions of Christmas celebrations.

They would continue those traditions of Christmas where they settled.

Christmas of 1847, the first in Salt Lake City, did not feature much of the usual trappings of Christmas. The 1500 or so of the first Saints in Zion did however gather at the flagpole that had been erected in the settlement and observed the day with song, talks and fellowship.

Christmas of 1848, just months after the Westovers had arrived, likely wasn’t much different in Salt Lake. 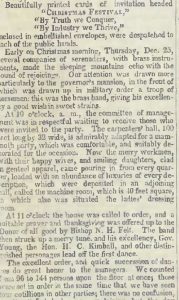 But by 1852 much progress had been made in building up the community, including a “social hall” where a Christmas day party was noted in one of the first editions of the Deseret News.

With the Westovers still living at that time within 3 blocks of the social hall there is little doubt that they were there.

It is quite likely that most there witnessed their first Christmas tree, which they then called a Santa Claus tree because it was decorated, as many trees then were, with gifts for the children.

Children really were the focus of the 19th century Christmas.

Thanks to the crafted images of Santa Claus in popular media it was common for children to commandeer the largest sock in the home – usually Fathers’ – to hang for Santa Claus to fill.

Stockings were filled with handmade rag dolls, knitted items, candy and nuts. If fruit was available, which it often was not, that too might find its way into a stocking as a treat.

Albert Smith noted the passing of Christmas in his journal a couple of times, without much detail.

But with his home filled with children, especially in the 1860s and 1870s, you can be sure a special family meal was held and that inclusion in Manti’s Christmas activities, whatever they were included the Smiths.

It was the Smith home, after all, that served as the community theater for many years after Manti was first settled and Albert, known locally as “Father Smith”, due to his age and long-time Church member status, was certain to speak on any given occasion when folks gathered.

The Westovers of Southern Utah likely participated in the dedication of the St. George Tabernacle, which featured the first ever performance of Far, Far Away on Judea’s Plains.

We will never know if any of our family participated as choir members but we do know that both Charles and Edwin worked on the construction of that building, which took many years to construct and it is likely many of the family were present when it was dedicated.

While details of our pioneer family Christmases are scarce we can be assured their Christmas celebrations always meant a family gathering of some type mixed with church and community celebration.

They changed as the times changed in the 19th century.

It wasn’t until 1870 that Christmas, along with Thanksgiving, became an “official” holiday. It did not come as grand announcement, but rather as a measure designed to give federal workers the day off with pay like most of their private sector counterparts already received.

What did this mean? It meant that Christmas had already been long observed in a special way as a common observance.

Our 19th century ancestors were not strangers to Christmas. As followers of Christ they marked the day, if even in their more unique way.

The History of Family Christmas Past
0 replies