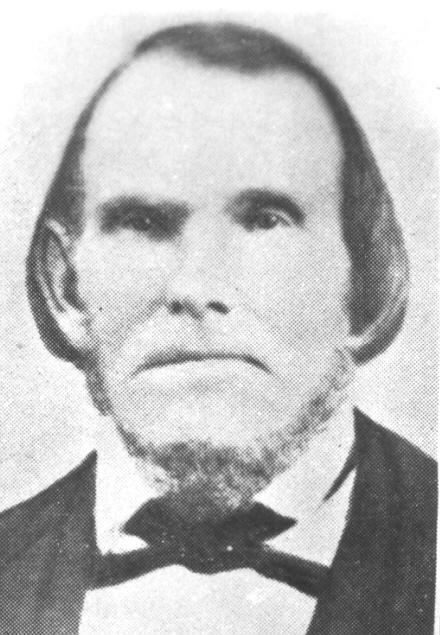 Certain dates tend to stick in the minds of most avid family historians. 1890, of course, is notorious.

That year of the federal census was mostly lost to history due to a fire in 1921 that wiped out most of the records. Nearly every family has a missing piece of information tied to that census – and that causes challenges in solving family mysteries.

For me one date in history is a very definite line in the sand: 1838.

1838 is the year when the first photograph of a human being was first recorded.

That is why I know that at least 18 people on Ancestry.com are dead wrong.

They have posted and shared the image seen on the right as a picture of Alexander Westover.

But that is NOT Alexander Westover.

Fortunately, we know who the man is.

He is Ruth Althea Rowe’s grandfather (her mother’s father).

Levi is actually older than Alexander – by about nine years. But he lived much longer, passing away in 1879. If I had to guess, I would say this picture dates from the 1850s at the earliest.

Levi joined the church in 1840 and traveled with his family west from Indiana in the 1850s. He settled in Ogden and had a successful farm there until he passed at nearly 90 years of age.

We don’t know who first confused the picture of Levi for Alexander – but the Internet has perpetuated the inaccuracy.

This little incident proves everything that is wrong with Ancestry. 1 person posted this image in error and several others re-posted it as fact. I contacted a few of those who had posted the image and told them as gently as I could who the picture really represented.

A few got upset with me — despite my best efforts to tell them why it couldn’t be Alexander.

Genealogists live by a strict code: it you can’t prove it, it’s not true.

That is really hard to do with photographs.

Most think that rule applies to names and dates. But it should apply to photographs, too.

In this case, all one has to do is the math. Alexander died before the age of photography. I would love to have an actual picture of Alexander Westover. But it is not possible.

But, sadly – like the mistaken image of Levi Murdock, I fear the posted picture is false.

You see, there is no record of a grave site for Alexander.

We know when and where he died. We even know with official government documentation of the time when he and Electa were married. But we have no documentation on his death and burial.

I am guessing that is because Alexander was likely buried on the farm he was working. They were pioneers – there just wasn’t a town cemetery back in 1834 in Goshen, Ohio – at least not one we have found.

So Alexander remains somewhat of a mystery in terms of what he looked like and where he is laid to rest. I am hoping that some modern day sleuthing can resolve some of this because Alexander is a key part to the Westover family story of the 19th century.

But so too is Levi Murdock. And look at that handsome mug of his – who can’t look at him and not see family?

A lot of people ask me why these old time photos aren’t more happy.

We have to remember that taking a picture then was quite a production. Albert Smith, in his journal, talked about traveling to Salt Like to get his “likeness” done, which is what they called the imaging process of people back then.

Albert bought a new suit for the event.

Likely, Levi did the same. Look at how sharp he is. But why isn’t he smiling?

Probably because he had to stand absolutely still for over a minute while the exposure was made.

Lost in our review of these old pictures is the reason they were doing it. These pioneer families and individuals took these images precisely because they knew we’d be looking at them today.

It was important to them.