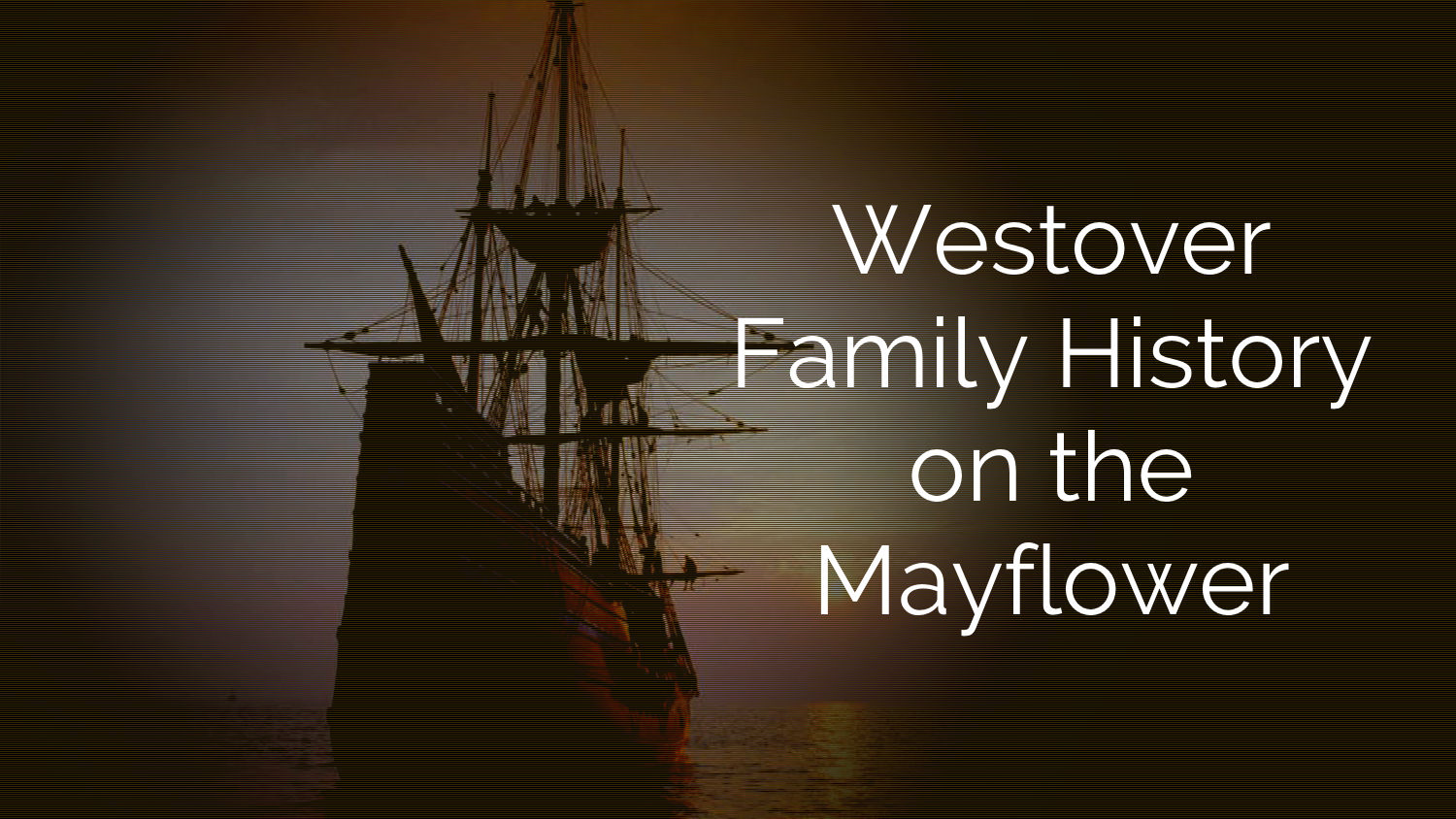 The year 2020 marks the 400th anniversary of the Mayflower. No doubt we will be hearing a lot of history related to this anniversary.

Plymouth was never intended to be their destination. But given their late departure and the rough seas along the Atlantic coast of the New World they ended up deciding, on Christmas Day 1620, to make their Cape Cod landing site of Plymouth as the site of their permanent plantation.

Here are the direct line ancestors we can count who came on the Mayflower: 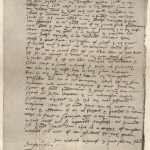 The will of William Mullins

William was born in 1572. William brought his wife Alice and children Priscilla and Joseph on the Mayflower; he also brought over 250 shoes and 13 pairs of boots, his profession being a shoemaker. He died on 21 February 1620/1, during the first winter at Plymouth, as did his wife and son Joseph as well. His original will has survived, written down by John Carver the day of Mullins’ death. In it he mentions his wife Alice, children Priscilla and Joseph, and his children back in Dorking, William Mullins and Sarah Blunden. 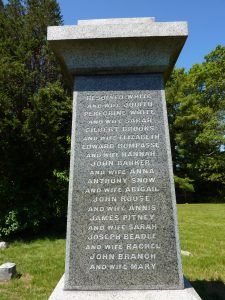 The Whites are believed to have boarded the Mayflower as part of the London merchant group, and not as members of the Leiden Holland religious movement. He was raised by step-father Edward Winslow following the death of his father William and remarriage of his mother in 1621.

They moved to Marshfield in the 1630s and later moved to Scituate where he married Judith Vassall, the daughter of William and Ann King Vassal. Resolved White moved his family back to Marshfield in the early 1660s and Judith died and was buried there on 3 April 1670. Resolved then remarried to widowed Abigal Lord in 1674 in Salem. He was a soldier in King Philip’s War of 1676, and became a freeman in Salem in 1680, before moving back to Marshfield a couple years later. He married Judith Vasssal 8 April 1640 at Scituate, Plymouth, Massachusetts. 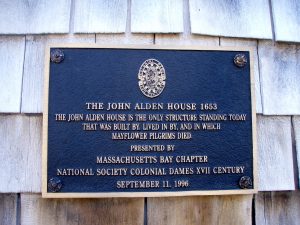 Marker on the John Alden house

John Alden was born in England about 1599 and died 12 September 1687 at the age of 88 or 89 Duxbury, Plymouth, Massachusetts.. He was a cooper by trade and hired on as a “Mayflower” crew member in that capacity at Southampton. The conditions of employment permitted him to either remain in America or return as a crew member to England. He chose to remain in the New World. He was one of the forty one signers of the Mayflower Compact.

It is said that John Alden was the first Mayflower passenger to set foot on Plymouth Rock. He was also one of the founders of the Plymouth Colony and the seventh signer of the Mayflower Compact. Distinguished for practical wisdom, integrity and decision, he acquired and retained a commanding influence over his associates. Employed in public business he became the Governor’s Assistant, the Duxbury Deputy to the General Court of Plymouth, a member under arms of Capt. Miles Standish’s Duxbury Company, a member of Council of War, Treasurer of Plymouth Colony, and Commissioner to Yarmouth.

Priscilla Mullins was born probably near Guildford or Dorking, co. Surrey, England, to William Mullins. She came on the Mayflower to Plymouth in 1620 with her father, brother Joseph, and mother Alice. Her family, herself excepted, died the first winter. She was shortly thereafter, 12 May 1623, married to John Alden, the Mayflower’s cooper, who had decided to remain at Plymouth rather than return to England with the ship.They John and Priscilla lived in Plymouth until the late 1630s, when they moved north to found the neighboring town of Duxbury. John and Priscilla would go on to have ten children, most of whom lived to adulthood and married. They have an enormous number of descendants living today.

The romance of John and Priscilla Alden was made famous in later years. You can read about that here.

Almost everything we know about the first Thanksgiving comes from a letter written by Edward Winslow written in December of 1621.

Born in England in 1595 Winslow moved to Holland in 1617 where he united with John Robinson’s church at Leiden, and in 1620 he was one of the Mayflower pilgrims who emigrated to New England. His first wife, Elizabeth (Barker) Winslow, died soon after their arrival at Plymouth. In May 1621 he married Mrs. Susanna White, the mother of Peregrine White (1620–1704), who was the first child born among the New England colonists. Winslow’s marriage to Susanna White was the first in New England.

Winslow was delegated by his associates to deal with the Indians in the vicinity (the Wampanoag) and succeeded in winning the friendship of their chief, Massasoit. He served as a member of the governor’s council from 1624 to 1647, except in 1633–34, 1636–37, and 1644–45, when he was governor of the colony. In 1643 he was one of the commissioners of the United Colonies of New England and on several occasions was sent to England to represent the interests of the Massachusetts Bay and Plymouth colonies.

Winslow was a figure that was featured prominently in William Bradford’s journal and there is much written history about the man to be explored.

The Westovers are related to Edward Winslow via his brother, Kenelm Winslow who didn’t come to Plymouth until 1632. He had been delayed in part because he was living in London learning a trade. He was a joiner, which means he could make cabinets, coffins and other furniture by cleverly joining the wood without the use of any nails. This was obviously a useful trade that could provide him an adequate living in the colony, especially as there were not many other accomplished joiners in the early years.

John Howland was born about 1599, probably in Fenstanton, Huntington. He came on the Mayflower in 1620 as a manservant for Governor John Carver. During the Mayflower’s voyage, Howland fell overboard during a storm, and was almost lost at sea–but luckily for his millions of descendants living today (including Presidents George Bush and George W. Bush, and Mrs. Theodore Roosevelt) he managed to grab ahold of the topsail halyards, giving the crew enough time to rescue him with a boathook.

It has been traditionally reported that John Howland was born about 1592, based on his reported age at death in the Plymouth Church Records. However, ages at death were often overstated, and that is clearly the case here. John Howland came as a servant for John Carver, which means he was under 25 years old at the time (i.e. he was born after 1595). William Bradford, in the falling-overboard incident, refers to Howland as a “lusty young man”, a term that would not likely have applied to a 28-year old given that Bradford himself was only 30–Bradford did call 21-year old John Alden a “young man” though. Howland’s wife Elizabeth was born in 1607: a 32-year old marrying a 17-year old is an unlikely circumstance. Howland’s last child was born in 1649: a 57-year old Howland would be an unlikely father. All these taken together demonstrate that Howland’s age was likely overstated by at least 5 years. Since he signed the Mayflower Compact, we can assume he was probably about 21 in 1620, so the best estimate for his birth would be about 1599.
John Howland had several brothers who also came to New England, namely Henry Howland (an ancestor to both Presidents Richard Nixon and Gerald Ford) and Arthur Howland (an ancestor to Winston Churchill).

Our connection comes from his brother, Henry Howland, my 11th great grandfather, who came to the Plymouth Colony with his brother Arthur either in the ship Fortune c.1621 or on the ship Anne with William Pierce as Master c.1623.

The earliest Massachusetts record for Henry Howland is in the allotment of cattle in Plymouth in 1624, where he appears as owner of the “black cow.” He was made a freeman in 1633. He was an early settler in Duxbury, Massachusetts, was one of the largest land holders in there, and was chosen constable in 1635.

In 1640 Henry purchased five acres of upland and an acre of marsh meadow in Duxbury, the price paid being “twelve bushells of Indian Corne.” For several years he was surveyor of highways in the town, and for nine years served on the grand jury, but in 1657 he refused to serve further on the grand inquest, apparently because he had become a Quaker and could not conscientiously perform the duties required of him.

The law against heretics in general was first enforced against the Friends, and then special laws were enacted against them. A fine of 5 pounds or a whipping was the penalty for entertaining them, and for attending their meetings one was liable to a fine of 2 pounds.

Thereafter he was persecuted by the authorities of the Colony. On the 3rd of June 1657, Ralph Allen, Sr. of Sandwich refused to serve on the grand jury, and at the next session of the court three days later he was brought before the jury for entertaining Quakers, fined and imprisoned. Within a few weeks Henry Howland, his brother Arthur, and his son Zoeth met the same fate. On 2 March 1657/58, the same day that his brother Arthur was fined £4 for permitting a Quaker meeting in his house and £5 for resisting the constable of Marshfield in the execution of his office, Henry Howland was fined ten shillings for entertaining a meeting of Quakers in his house contrary to court orders.

Henry owned land in Dartmouth in 1652. In the original purchase of Dartmouth, he is assigned one share with William Bassett. Henry was one of the original twenty-seven purchasers of what is now Freetown, Mass., and finally ended his days in Duxbury.