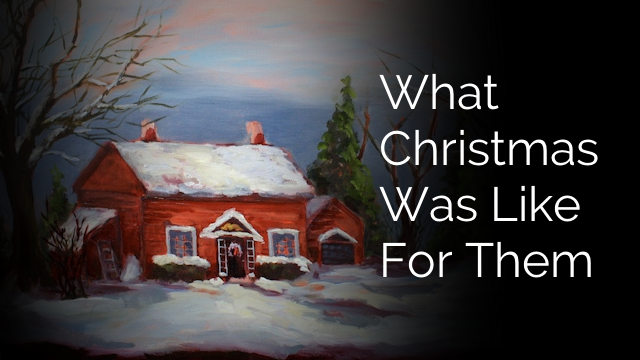 In my world there are three seasons: baseball, Christmas and family history. These three things are a backdrop to my life as a husband, father, son, and grandfather.

It might be a bit unfair to call them seasons because for me none of them really begin and end. I always seem to be engaged in something connected to each of them. But rarely do those worlds ever collide.

Today they do in that I want to address Christmas of our forefathers and just what it was like for them.

My interest in Christmas is purely accidental. I was raised in a home where Christmas was grandly celebrated but it wasn’t until I became an instant father to the only 5 year old in the world who didn’t know of Santa Claus that I became something of a Christmas historian.

Knowing we wanted to have a large family, one of my first parental challenges was convincing Aubree that Christmas Eve did not mean opening presents. To me the future Christmas Eves of our family would be wrongfully spent if I didn’t straighten this out.

It took a letter to Santa, a response from an elf, and the daily magic of a dispatch from the North Pole via a fax machine to make that happen. Aubree ended up taking these faxes with her to school, spreading them around as kind of a jolly missionary and getting other kids to bug parents to call me so they could get the faxes for their children too.

Before long we were faxing all over town, then across the country, and later to different parts of the world every Christmas.

It was getting expensive until I discovered the Internet and put the effort online through a network of websites. Today MyMerryChristmas.com is one of the largest Christmas websites online and SantaUpdate.com is the oldest Santa tracking venue on the Internet.

Christmas brings people together. I was amazed in the early 1990s that people would fax Santa back sometimes to things that were mentioned in his updates.

They just wanted to share and they wanted to ask their own questions about Christmas. I learned long before social media ever came around how powerful the Internet could be in connecting people. I learned it through the backdrop of Christmas as we built our websites and developed our online skills.

As it has expanded I have had to continually study the history of the season. This did not begin as a joy to me but it became such when I saw that the work of being able to explain Christmas and share its history, traditions, legends and celebration would give me friends around the world.

This accidental endeavor has also given voice to my testimony of the Savior and an outlet to share the gospel of Christ in a different way.

It has given me as well a number of skills relative to research that has served other parts of my life, especially my work in family history. The ability to find facts, discover stories and present more in-depth information is vital to the work of sharing anything online.

Christmas, like most things, is different than people suppose because they are exposed to limited histories in school courses or agenda-driven history through modern media and movies.

For example, historians tell us that Christmas was dead in England before Charles Dickens produced A Christmas Carol. We know that is false.

Christmas was at the epicenter of debate for our Puritan Westover ancestors in Taunton, England in the 1500s and 1600s.

The dark ages has so corrupted the Church of England – and Christmas – that the season literally became a dangerous time to be on the streets.

Christmas was a free-for-all celebration by this point. It was a time where roving gangs had hijacked the quaint and neighborly tradition of wassailing and turned it into an opportunity to rob and plunder.

In many areas the priests of the church contributed to the misrule by allowing the pagan elements of winter solstice celebrations to continue. Role reversal was common as the “boy bishop” would take over the church and the priests would join the masses in the excess of partying.

These were seasons of riotous parties, widespread gambling and drinking, excesses in feasting, decorating and violence in the streets against non-participants, the aged and handicapped. There was widespread destruction of property and even sexual dalliances that would later be excused by the very priests who engaged in them.

The pre-Dickens Christmas was one of the many reasons for the Puritan uprising in England – and it had a profound effect on our family history.

When Jonah Westover began his family in Simsbury, Connecticut it is doubtful that he even celebrated Christmas. The Puritans of Boston very clearly banned Christmas for more than 50 years as the colonies of New England were established.

That is not to suggest, however, that Christmas was not celebrated at all.

While Governor Bradford himself recorded the story of chastising Puritan citizens found on the street on Christmas Day up to no good by playing games the fact of the matter was that while he could suppress the celebration of Christmas he could not entirely extinguish it.

Within the early American journals and media of the time there are evidences of family gatherings and private worship that occurred at Christmas even in Simsbury during the 1600s.

In fact, the idea of a “holiday season” was born of New England tradition. While Christmas may not have been a headline event Thanksgiving surely was.

It was our Puritan ancestors who developed the all American tradition of “pumpkin pye” and going over-the-river and through the woods to Grandfather’s house.

Thanksgiving then was a time declared by the governor or other royal authority. It usually came after a victory at war or some other great event that affected everyone. Thanksgiving could come at any time of the year and it was declared a time of public prayer and acknowledgement of God.

During these times there was no such thing as a “holiday” – or a day off.

That is why when the declaration of Thanksgiving went out by royal decree it became a big deal. Working for that day was out, worship was commanded and normal activity ceased to focus on whatever the reason.

Often the reason was a bounteous harvest.

The “first Thanksgiving”, as taught in grade school and on television in Charlie Brown’s Thanksgiving, was definitely the real deal. It happened. Maybe it didn’t happen exactly as we have been taught with turkey and all but it definitely happened.

And it repeated itself as a societal tradition year after year.

The reason is quite plain. The end of the harvest meant the onset of winter. And winter brought a change in routine and a great increase of disposable time. It was the one time of the year when family could finally gather at all. It is no wonder that it became celebratory in nature.

Our New England ancestors of the Westover family surely engaged in the reveling of the pumpkin pie. Newspaper clippings from the 1700s suggest that it was common to bake and consume at least 10 pumpkin pies per household at Thanksgiving.

That’s a lot of love for pumpkin – and an indication of how large their gatherings were.

Nearly a century later, the now-established American tradition of gathering family and celebrating with pumpkin pie was written of in this way:

Ah! On Thanksgiving Day, when from East and from West,
From the North and from South come the pilgrim and guest,
When the grey-haired New Englander sees round his board,
The old broken link of affection restored.
When the care-wearied man seeks his mother once more,
And the worn matron smiles where the girl smiled before,
What moistens the lip and what brightens the eye?
What calls back the past, like the rich Pumpkin Pie?

Over time, as New England populated away from the busy centers of Boston, diversity fractured the Christian church landscape.

Methodists, Baptists, Congregationalists and Universalists all celebrated Christmas but did so in different ways. Almost all were very different from the Christmases of their grandfathers in merry old England.

But their religion melded with their lifestyle of survival. It was a life of farming and hunting, of building, gathering and forging with steel, copper and other metal.

Caught up in it all were the principles of liberty and the fierce American spirit of Independence. Jonathan Westover, brother to grandfather Jonah Westover, Jr, moved the Westover clan to Sheffield, Massachusetts.

As a founder of the community he played a part in the establishment of a church there. He took a dim view of a forced fee proposed for all town citizens in order to pay the priest of the Church. That was the tradition and he wanted no part of it. He would not do it by force, he claimed he would do it “in a gospel way”.

The Church of England in Sheffield celebrated Christmas and the Westovers of the mid-18th century were big participants.

Religion was a contentious subject because the growing farming communities of western Massachusetts were continually infused with more people from different countries. It was the German farmers who brought the traditions of the Christmas tree to America in the early 1700s and this tradition was happily adopted by nearly all New Englanders over the next 100 years.

George Washington saw the first Christmas trees in his life when fighting Hessian mercenaries on Christmas of 1776.

Washington was a Southerner who very famously celebrated Christmas. As the heir of a large landowner Washington was land rich and as such was basically American aristocracy. His Christmas traditions included sending away to Europe for the latest in fashions for gifts and large holiday parties at Mount Vernon.

He saw a very different Christmas leading the American Revolution in areas north of his Virginia plantation. Amongst his many troops were the Westover brothers of Massachusetts.

It was Washington’s Christmas at Valley Forge that taught him the mindset of the Northern Christmas. It was clearly a tradition of his New England troops, one held in the highest esteem.

But if we’re looking for the details of our ancestral Christmas in abundance we need look no further than our family of the 19th century.

That will be discussed in our next post to come out later this week.

The History of Family Christmas Past

The History of Family Christmas Past