One of the most exciting parts of family history is working with old family photos. To have images from well over 100 years ago is a real blessing, especially as we learn more about the lives of those in the pictures.

Once upon a time I had a career in what was known as photofinishing — I made pictures. Through that time in my life I learned a lot about pictures and how to improve them. Those skills are bearing fruit at this time in my life as I work to do what I can with less-than-perfect pictures of the past. This post is all about tips for doing this on your own.

Below is an image of William and Ruth Westover — an outstanding old image that I figure dates from the 1890s (if anyone knows the actual story of this photo, please share). As you can see, this wonderful image is old, faded and not-so-great with the details: 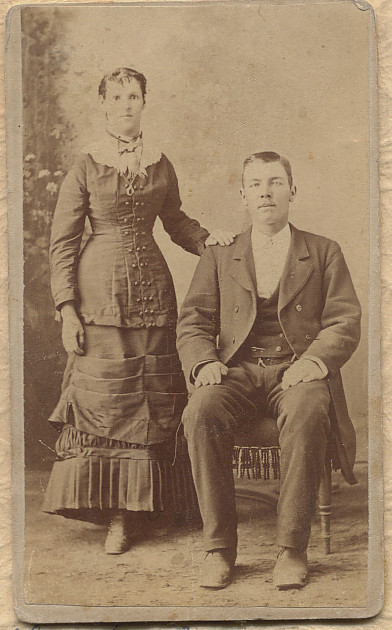 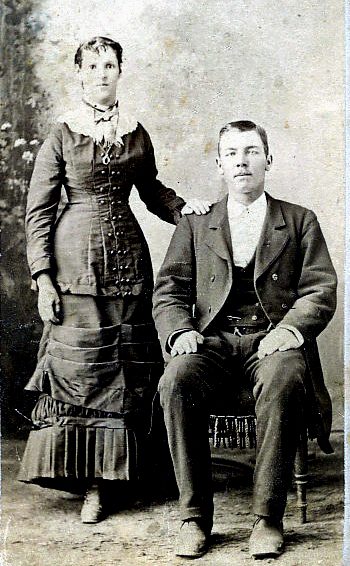 Quite a difference, eh?

Such are the wonders of modern software. But before you go out and buy a software program and start hacking away at your old photos there are some things — rules, even — that you should be aware of before you begin:

Intent
Photographers are artists just like anyone else that creates. In the photo above a professional took great care to create a lasting image using all his skills and the technology of the time. As restorers of the image we need to respect the photographers intent. One of the things I see over and over again on social media is the application of a lot of software-edited images that completely destroy the intent of the original photographer. Things like color filters, masking with other images and weird visual effects are added by some that radically changes an image and makes it more or less than the original photographer intended.

A simple rule of thumb is this: just don’t. You do NOT have to use every tool in the software box on an image.

Our intent as restorers has to be centered in getting as much out of an image as we can without destroying the image in the process.

Focus on Faces
The detail we’re capable of achieving now through software and screen-viewing of old images is amazing. But the work of restoration must focus on faces — we want to see more of the people. Everything else is secondary. In this image above the restoration work on the faces just happened to reveal more detail about their clothing — which is a wonderful, happy by product. But the clothing is not our focus — people is what this work is all about.

Work from Copies
Years ago if we wanted to mess with an image we had to have special equipment that would allow us to make copies of an old image. Then we would have to work with the copy. That process meant a degradation of the image sharpness because a copy manually produced was never as sharp as the original.

Digital technology changes all of that.

Many of the images in our photo archives are small — some as small as 1-inch square. Scanning them and working with them on a screen gives us a chance to see the details in that image we never could from the small original. In many cases, if an image is strong in focus and contrast, we can actually improve upon its sharpness.

Always keep a clean and organized file of your originals. And work strictly from your copies.

Understand Screen and Print Resolution
We take more pictures than ever but how we view and share them has changed radically. Most images are now seen on a screen, whether it is large like on a high definition television or small, such as on a phone. While in some cases we want an actual print of an image that is more the exception than the rule any more. Regardless, when working with images you have to be aware of both screen resolution and print resolution and what that means.

Screen resolution is what a picture looks like on any kind of screen. Generally, images do not need huge resolution to be viewable on screens large and small. In those images above I can project them on a screen thirty feet high and they will still look good.

But printing is another story.

I have not seen the original print the scan from above was made from but I would guess it to be roughly 3 by 5 inches max in its original state. That original size — and the method by which the scan of that image above was made — dictates what kind of print I can make from it. For as great as that image looks on a screen it won’t make an acceptable print beyond maybe a 5×7. And that is because the print resolution (dots per inch) is relatively low.

Understanding these distinctions is important in working with images.

As you work in software programs you quickly learn that images are resource intensive — meaning that the higher the resolution of an image the bigger the file size is. That requires a computer with greater storage space, a processor with greater computing power and more time with which to work with an image. Not everyone has the same capacity with their computers and most will work within the framework of what they have — and that affects outcomes when it comes to restoring old pictures.

Group According to Source
I keep the photos I collect in groups according to where they came from. It is important to do that because “Grandpa’s Photos” can yield better clues to who people are than “Old Family Photos”. If Grandpa had the images in his collection chances are greater of discovering details in a journal that correspond with a person or an event. Where a picture comes from should be noted because as time passes it will give information to future researchers looking for answers.

Now, these are general rules. There are many other rules as it relates to restoring photos that are much more technical in nature. And we’ll get into that in another post.

Are You Giving All Your Family History Just to Facebook?