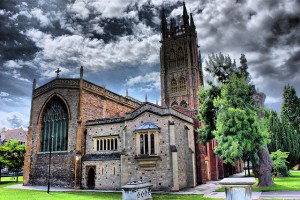 St. Mary Magdalene Church in Taunton, England where Gabriel Westover was Christened in 1567. His son, also named Gabriel, was Christened there in 1593.

If there is one common factor to the Westover name in England it is the location – almost all are traced to the south and west portions of Great Britain. The most prolific concentration of families bearing the Westover name is in Somerset county.

Somerset has a known history dating back more than 2000 years.

Largely rural, the county has been known more for its wool and cheese industries than for its big cities.

Over its rolling hills the battles of Romans and Vikings were fought anciently. As the centuries of the dark ages passed, Somerset played a key role in the rise of powers and the wars of kings in British history.

Nearly all the big events of the monarchy of England were tied to controversies over religion leading up to the 1500s. For almost 200 years, since the time of reformist theologian John Wycliff, discord against the Roman Catholic Church had been brewing steadily.

But when King Henry III could not get an annulment to one of his marriages approved by the Pope the split between the Church of England with Rome gathered steam. As he grasped control of the church the population began to revolt. That rebellion intensified under the rule of King Charles 1 in the first half of the 17th century. He claimed divine right to rule the church as he saw fit and his brutal tactics threw England into civil war.

The Westovers were a religious family. Living in Somerset they were more than likely Puritans.

Gabriel Westover was christened in St. Mary Magdalene Church in Taunton as a baby.

Gabriel married and had a family but died in his 30s during a period of time when clashes between the Puritans of Taunton and the forces of the King were especially active.

As Puritans most of the citizens of Somerset were considered radicals – enemies of the crown and instigators of revolution. They were, in many cases, hunted. They were brutally taxed. And they were forced to worship in ways contrary to what they were reading in their English Bibles.

We can’t say for sure this is how Gabriel died, but his own son, also named Gabriel, lived nearby and took decisive action in safeguarding his family from the crown.

Gabriel Jr., his wife Joanne, and at least four of their children probably fled for a period of time to Holland, where other refugees were staged as they organized expeditions to the New World. In 1620, pilgrims famously chartered the Mayflower and left from Holland to form Plymouth Colony. A few years later, Puritans would leave Holland to established Massachusetts Colony.

Among the early arrivals was Jane Westover, the 16-year-old teenage daughter of Gabriel and Joanne. She was soon followed by her brother Jonas, thought to be about 11 years old when he came over. That was all of the Westover family that emigrated to America from England at that time. They would give rise to the Westover families that would help settle America.

Continue to 1700s — Settlers and Patriots