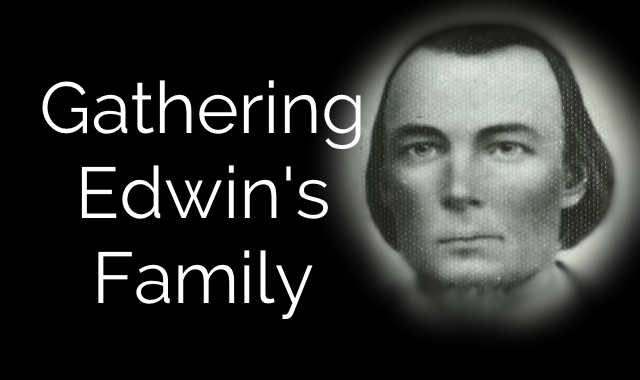 Earlier this year I was contacted by an individual working on a project related to the 150th anniversary of the Golden Spike associated with the completion of the Transcontinental Railroad. Her goal was to share the history of residents local to Cache Valley who worked the railroad after it was completed. One such individual was John Henry Westover, son of Ann Findley and Edwin R. Westover, and a brother to my grandfather William.

I was very familiar with John Henry. He’s one of my family history dead ends. This man is buried here locally and I was able to find a very, very brief obituary for him. And I even have a photo of him from his youth where he played in the band in Mendon, Utah. But that is where my knowledge of him ends. This great uncle is largely a mystery to me.

He came to my mind almost immediately this summer while in discussion with two men who have grown dear to me – Don Westover and Jason Walker. Like John Henry, Jason, Don and myself are all descendents of Edwin Ruthvin Westover.

We were at the Westover Family Reunion in Rexburg and engaged in conversation about Edwin. Together we openly mused about the possibility of holding a Edwin R. Westover family reunion.

Since that time I have been beset with these thoughts almost constantly. I know enough not to ignore such promptings. The idea is not really about a family reunion so much as it is a gathering Edwin’s family.

What’s the difference between a reunion and a gathering? Bear with me as I explain.

We know who Edwin’s ancestors are. There are many who have contributed to that effort over the generations. But a “gathering” of Edwin’s descendents has never been done.

As Jason, Don and I discussed this we agreed it was high time we bring the families of Edwin Westover together. Before we can do that we must gather them.

Edwin can rightfully be called the patriarch of the modern Westover family. He was the first male member of the family to join the Church and his pioneer story, and life of trial and tragedy, were a beginning to an incredible family legacy. While we can account (and have done so) for his life we cannot fully account of his family.

Edwin’s family was central to his life’s purpose. It drove him. He was promised in a blessing that his descendents would do the work of his family history and be present with him at a feast with the Savior.

Edwin was married three times in his lifetime. His first wife died shortly after the birth of his first child. He remarried on his way west to Sarah Jane Burwell and over the course of their life together they had 13 children. He took Ann Findley as a plural wife in 1856 and had five more children.

That is the gathering we want to do. We want to develop Edwin’s tree backward and forward. We do not want anyone to be unaccounted for.

So we have set a goal. We would like to hold an Edwin R. Westover family reunion in about five years — around the 27th of August in the year 2024 — Edwin’s 200th birthday. Between now and that time it will be our work to simply find and account for all of Edwin’s descendents.

I propose a yearly meeting, if possible, built around Roots Tech in Salt Lake City each winter. There may not be many of Edwin’s descendents who actually attend Roots Tech but the technology exists for us to connect online. That time of the year is an excellent time to gather those we can find to share and update information. If successful, we can arrange for a physical gathering for Edwin’s 200th when the time comes.

We will use this space to build the record of Edwin’s family. How we will do this and what information we will actually require will be discussed later.

What I believe is most important is that we attempt to do this. We, as his children, do owe it to him to make a family record with every name of every child born since Edwin lived. We are his family.

And this is a work of love that was dear to Edwin.

In his final blessing, it reads: “…Thy power in the priesthood shall enable thee to do all the good that is in thy heart, even to accomplish and fulfill all the blessings that have been sealed upon thee pertaining to the new and everlasting covenant, or at least to lay the plan in which thy children shall labor to redeem they father’s house that not one be lost…”

“Not one be lost”, I believe is a worthy theme of this effort. Let’s find the families of Edwin R. Westover. Let’s put it together and share with every one of them. That is the goal.