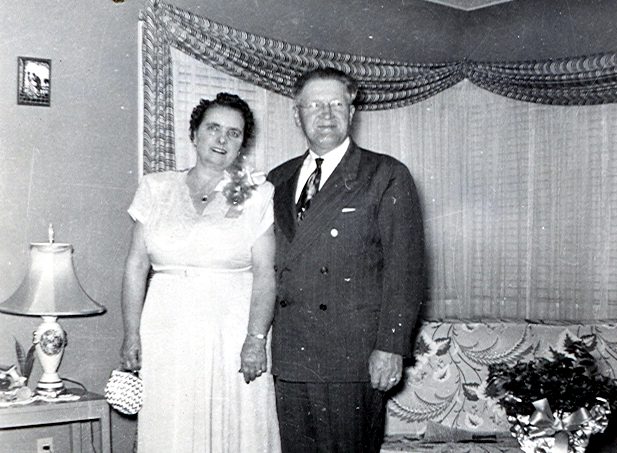 Perhaps one of the most overlooked areas of doing family history are the love stories of the couples who build the family. Every couple has a love story.

Historians caution us that couples of the past did not always marry for love. Some married out of necessity and others married because of cultural traditions of the time. But I like to look at love stories from the perspective of the end. In other words — what did they accomplish? — versus how they began.

For example, the love story of Albert Smith, Sr. and Sophie Catherine Klauen was far from the usual boy-meets-girl variety. Both had already been married and had families of children before they met. It wasn’t attraction but rather survival and spiritual obedience that brought them together.

They came from different worlds and spoke different languages. There was every reason for them NOT to be together.

And yet, in the end, looking at it backwards, theirs is a wonderful story of love and sacrifice.

Albert was a stalwart Mormon pioneer and early member of the Church. He lived in Nauvoo, marched with the Mormon Battalion and was called to help settle Manti, where he fought the crickets every season in an attempt to harvest crops and he helped to build the temple there. Long before he met Sophie he wives and children.

Sophie’s story equally relates a full life before she met Albert. She was married and had seven children with her husband Peter in Denmark. Shortly after Peter unexpectedly died Sophie had a spiritual dream of a visit by missionaries bringing her a message from Christ. Her dream came true, she later met the missionaries and joined the Church. With her remaining living children she left Denmark for England and then joined the Willie Company in England to migrate to Zion. You know the story of the Willie Company. Sophie survived, losing one child along the way. But she was penniless and homeless when she arrived in Utah.

Albert could be said to have lived several lives. There was a life as an early Latter-day Saint in Nauvoo. Then the life he lived as a pioneer, first in getting to Utah and then in carving out an existence. His first wife, with whom had had several children, died in September 1856. He married just a month later to Rhoda Gifford, a widow with several children of her own. Then, on Valentine’s Day 1857, he married Sophie.

You have to put the lives of all of these people in context with the history taking place. The fall of 1856 was when the Mormon Reformation took place, a period when church members were called to repentance and asked to live more righteous lives. It was a time of fervor, of re-baptism, of greater commitment to the faith. At no other time, historians say, was the practice of plural marriage more widely accepted. Many outside of Utah and outside of the Church looked upon that practice in a salacious way but the truth of the matter is that plural marriage was a matter of great faith and even survival. It was a principle they believed came from revelation.

In the case of Albert and Sophie, it was also a practice with a practical upside. Sophie arrived with the Willie Handcart Company in late November 1856. She was completely destitute. Her family was taken in by local Church members in Salt Lake City and literally had to be given all the necessities of life because they had absolutely nothing left. During this time Sophie attended a meeting presided over by Heber C. Kimball.

Before leaving England Sophie had been given a blessing, encouraging her to go to Utah. In that blessing she was told that she would meet a prophet there, that her testimony of the restored gospel would be strengthened as she sacrificed in helping to build the kingdom. Sometime between late November 1856 and February 1857 she was attending a meeting and she met Heber C. Kimball. He did not speak Danish and she did not yet understand English. But somehow they communicated and President Kimball assured Sophie that the Lord was aware of her sacrifices and would see that her needs would be met. Sophie was convinced President Kimball was the prophet she was told she would meet in Zion.

Albert was in this meeting as well. And when President Kimball said many of the single mothers who had recently come to Zion needed husbands he hesitantly volunteered to help. Sophie was assigned to him and he took her home to blend in with his other new wife and her family. Between them were more than a dozen children who were not Albert’s own. On February 14th — Valentine’s Day, ironically — Albert and Sophie were sealed in 1857.

Can you imagine? Albert at this point was about 53 years old. Sophie was much younger, around 33. They had a language problem. While ALbert had a large farm and what many considered the largest home in Manti it wasn’t THAT large. And in addition Albert’s oldest son, Azariah, who was a pioneer in his own right and also a veteran of the Mormon Battalion, had long before suffered a devastating injury that left him with seizures and erratic behavior. Most people were afraid of him. In fact, Albert’s other new wife, Rhoda, eventually asked for a divorce and it is speculated that part of the reason was because of the challenges with Azariah.

Now forward the clock more than 30 years. Albert and Sophie have added seven children to their union and have raised them faithfully. It was Sophie who nursed Azariah for years and helped him to become healthy enough to live on his own, marry and raise his own family. Records show Albert and Sophie were active in Family History and attended the Temple sometimes three times per week to complete the work for better than 1300 names on both sides of their family.

Over the course of time they became beloved to each other. It’s a wonderful love story to contemplate.

It stands in great contrast to another love story central to the history of the 20th Century Westover family. William Westover was the son of Edwin and Ann Westover, of Mendon, Utah. This great patriarch of the family was born in 1861 and early on he had to grow up. When he mother moved to Mendon to aid her parents and her dead brother’s family in 1869 William became the man of the house because his father, Edwin, returned to the mission field where he was called in Southern Utah. As he grew from boy to teen he was active in the beautiful community of Mendon and fell in love with a local girl who was likewise the offspring of Mormon pioneers. Her name was Ruth.

William and Ruth would endure a seven year long courtship before finally being able to marry. We don’t know exactly why the delay — it was certainly unusual for the time. But finally, in 1883 when both William and Ruth were both 22 years old, they married in a grand event celebrated by family on both sides. Like their parents before them they struggled to make a living and pushed the boundaries of the frontier. They suffered from difficulties in bringing children into the world. There was sickness, and hardships, and poverty. There was also faith and community service.

Their story was seemingly met my tragedy. William developed a cancer that was discovered when he was only about 41 years old. He died in 1903, leaving Ruth to make ends meet on a struggling farm in an isolated place known as Rexburg, Idaho with eight children between the ages of 1 and 16.

Ruth was heartbroken. Surviving family histories of the time relate that she “lost her mind” in the decade she would outlive William. Their condition was desperate. But like Albert and Sophie, William and Ruth and their children had the foundation of the Gospel of Jesus Christ that they lived by. Looking back at their story — desperate and tragic as it was — you can see the success and happiness that came of their love story. They left behind a family of children that would go on to love and accomplish much, writing their own love stories along the way.

What love built between William and Ruth could not be destroyed by the harsh realities of the world.

Note: The photo at the top of this post is of Arnold and Mary Westover. Mary is a granddaughter of Albert and Sophie. Arnold is a son of William and Ruth. Theirs is another great love story of Westover family history.