When I first began using Family Search I was somewhat frustrated with the idea that anyone could edit information on that one-world family tree.

To me, the “watch” feature is a critical function of Family Search. I click on “watch” next to any name and if someone comes along and adds or changes something I get notified about it right away.

Indeed, I get annoyed with unknown folks making ill-advised changes to data associated with my family members.

But over time I have come to see the wisdom of an open-edit record.

Not only do we get more complete information about our ancestors, in time more of their stories become easier to understand because inevitably other people have data, journals, and photos I do not possess.

This is a good thing. We all make the record stronger. The stronger the record, the more accurate the information we receive.

Family stories, you see, are not always family truth. 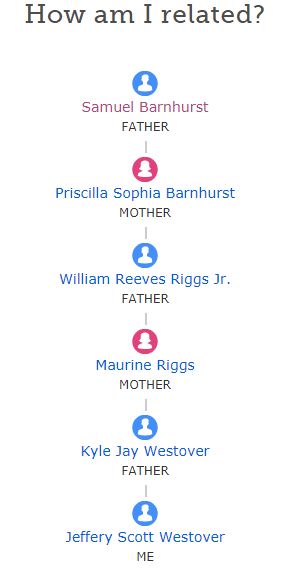 Consider for example the story of Samuel Barnhurst.

Samuel Barnhurst was the father of my Great Grandma Riggs. I’ve spent some time the past year or so working on learning the Riggs story so that I can begin sharing it here.

Like most of our stories I tend to focus on migrations west that explain the how and the why we all came to be in this part of the world now. Samuel’s story of his westward migration is no less epic than any other we’ve shared here.

Samuel Barnhurst was born in 1827 in Philadelphia to an English immigrant family. His parents were from England where his father was a silversmith. They were well-to-do, well connected and quite religious.

His parents, Joseph and Priscilla, were married and had two children before coming to Philadelphia sometime between 1812 and 1819. They would have ten more children in America, including Samuel, who would be the 9th of their 12 children.

Perhaps it was because of their wealthy status that we have pictures of almost their entire family, both together around 1840ish and later in life as photography became more established. I am hopeful that I learn from the records left behind of Samuel’s siblings what really happened in his early years that caused him to leave Philadelphia.

Certainly his conversion to the LDS church was central to the story.

I started collecting information on Samuel about 20 years ago when I had stumbled across a family history website who claimed him as an ancestor. Sadly, I can no longer find that website or remember who authored it but the story I archived from it varies quite a bit from what is now available from various sources on FamilySearch.org.

Joseph and Priscilla and family were very active in a Baptist Church in Philadelphia. Young Samuel, who in his mid-20s had married a woman and started a family of his own, was employed in something that gave him extraordinary interest in religion.

The story I first found on that website was that Samuel was a newspaper columnist who wrote on religion in Philadelphia. One of the stories he wrote about in the 1840s was rumors of the Mormon Church and their “gold bible”.

In the aftermath of his published story mocking the Church he attended a lecture where missionaries of the Church rebutted his story – and therein began his association with the Church.

After catching up on Samuel’s stories on Family Search, I’m not sure any of that is true.

Here is an excerpt from another history posted of Samuel on Family Search:

“Samuel had high blood pressure and varicose veins. Doctors did all they could for him, bled him and put leaches on to keep his veins from bursting. One night he was wondering what to do, he either dreamed, or had a vision. He saw two men; a voice told him to go to them and they would tell him what to do to be cured.

About that time, Mormon missionaries were sent to that city. One day he was walking down town when he saw the two men he was shown in his dream on the other side of the street. He crossed over and spoke to them. They told him he would have to have faith. He was about 28 or 29 years of age. After attending their meetings he was favorably impressed with their teachings. His family was very opposed to the Elders but he decided to pray to find out for himself.

He went to his room to pray and see if the Church was true. The room began to get light. The brightness of it was more than he could stand and he told the Lord he was satisfied, to take it away. As the light began to die down he thought how foolish he was not to see more when he had a chance. No sooner had he thought this than it became brighter than before and he said he could stand no more. A voice said, “Anytime you want to see or hear more, ask and you shall receive.”

He asked the Elders for baptism and later was administered to for his illness. He was instantly healed and was never troubled with it again.”

Regardless of what his situation was that brought Samuel to the Church it is clear his family was greatly opposed to it.

Almost universally in all the histories shared about Samuel the story is told of him coming home one night and hearing voices of people in another room talking about him.

As he listened to their conversation through a door he heard their plot to kidnap and institutionalize him for his conversion to Mormonism.

So bitter was the divide that Joseph, Samuel’s father, evidently said “it would be bad enough to have a son in the insane-asylum, but even that would be better and easier to live down than having a son who had joined the Mormon Church”.

Whatever the truth, Samuel left.

No official record of divorce is known and family records clearly show that Samuel never again had contact with any of his family – not his parents, his wife or his children – in Philadelphia. In fact, in later years both branches of the Barnhurst family were shocked to learn the other existed.

In 1857 around the age of 30, Samuel headed west in the company of returning missionaries – including apostles John Taylor and Erastus Snow.

That year of 1857 was pivotal in the history of the Church in Utah. We’ve talked about it before. The march of Johnston’s army was underway and the Church was going through the famous Mormon Reformation. This was when polygamy grew immensely within LDS ranks, as we’ve seen the histories of other branches of the family.

It was also a season of peak immigration with Saints arriving from Europe, many of whom spoke languages other than English. This included a young single woman from Denmark named Ane Marie Jensen, whose story shared some interesting parallels to Samuel Barnhurst’s.

Though they did not know each other, at the encouragement of their new Church leaders in Utah, Samuel and Ane married just months after arriving in Utah in 1857.

Their 30+ years together would bring 9 children into the world and would see them move several times before settling in Hatch, Utah where they and their children would impact local history.

In fact, a Google search of Hatch history reveals that a son of Samuel and Ane served in a Bishopric with William R. Riggs when they moved the town of Hatch to higher ground to avoid flooding from a local dam.

I don’t know the story of that association yet but it yielded a marriage between the Riggs and the Barnhurst families.

One history states that Samuel never reconciled with his Philadelphia family and that he refused to acknowledge or even to talk about them for the remainder of his days.
I question that. After all, my Great grandmother – his daughter – was named after his mother and his youngest child was named Joseph, after his father.

I’m guessing and this is pure speculation that the adult years of gospel training in the life of Samuel Barnhurst taught him not only forgiveness but respect for love and family. Theirs is another reunion I’m curious about when it took place on the other side.

I would encourage you to have an account at Family Search and to get out of the data of births and deaths and ordinances and begin reading and sharing the stories and histories people are posting there.

If you have old histories sitting around somewhere that are not on Family Search I would encourage you to upload them for all to enjoy.

Samuel Barnhust and Ane Marie Jensen are pioneers – beloved as much as any others we have spotlighted. I look forward to learning more about them.

The Importance of Visiting