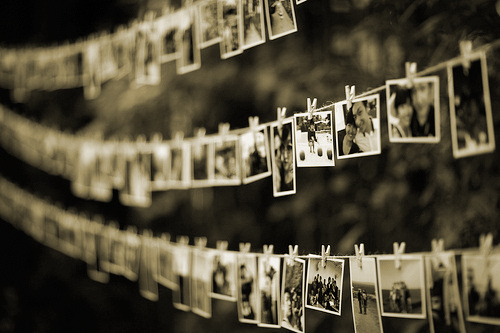 It has been a source of some bitterness to me that on top of all we have been through this year we had to make a move we didn’t anticipate and didn’t want. We literally left our home of the past several years kicking and screaming in protest. And it was a pretty ugly experience – it was done in haste, things were scattered and we have had to adjust to everything new on the fly. Here is it months later and we are still trying to find a home for everything.

So when my Dad needed to move in recent weeks I knew it would not be something I would embrace with enthusiasm.

As is common, I think, for a widower, Dad is saddled with 50+ years of accumulation – stuff that he and Mom worked hard for and that reflect a life together of constantly changing circumstances of both need and want.

They have a lot of stuff.

I have not been the only one who has been involved with helping Dad move. On one glorious Saturday a few weeks ago my sisters, my kids and several of my nieces and other available folks came together for just one big part of the overall project of getting stuff moved. It was actually a fun day, despite the work.

Dad rented a large – and I mean HUGE – storage unit closer to his new home and we have been slowly filling it, trying to organize it, while at the same time trying to thin it out. There have been many trips to the DI, some trips to the dump and plenty of spreading out of useful items to homes in the family. My son Enoch and his wife Angie are just getting started and their little apartment is filling up with some of the remnants of stuff left over from the times and seasons of my parents.

It would be easy, in my mind, to look at a storage unit some 100 feet deep and maybe 20 feet wide filled from back to front well over my head and think, “Wow, that’s a lot of crap.”

I’ll admit to thinking that some over the weeks we have been working on all this.

But as we have dug into the stuff I have come to some different conclusions.

Buried in all this stuff is the progression of individuals and of our family.

I spied some hand-made charts I recognized from family nights long ago. They were outlined by my Dad but they were the artistry of my Mom. “Remember those?” Dad asked me as I pulled one out. “Yes, I do. Very much so” I said, thinking of those lessons where Dad would have his scriptures open while using the charts. Mom said little during these lessons but she would be engaged nonetheless. My memory of those charts was shattered just a bit when Dad commented, “We made those to teach your mother the gospel.”

That’s a huge lesson: Dad and I were looking at the same thing but recalling our own perspectives of what they were. I always thought they were made for us kids to learn the gospel.

My mom was my Mom — I never considered when I was a kid learning from those charts that she learned from them too. And yet here was Dad telling me that he and Mom went to all that trouble to make those charts because he wanted to help Mom, a convert to the church and a recent one when those charts were made, to learn the gospel.

As we have worked side-by-side on stuff there are puddles of evidence from earlier lives of all of us – not just Mom and Dad.

Found were high school yearbooks, report cards, and various items of absolutely no value except in the memories they hold and the time of life they were to each of us.

Of course, having lost Mom, it has been hard not to see her fingerprints on everything.

Mother was a pack rat, you would think, and you’d be wasting your time and missing the point if that is all you see in that stuff.

Mother’s boxes and boxes of silk flowers, her handmade crocheted afghans, her prodigious supplies of scrapbooking stuff, and the crates and crates of Christmas decorations are so much more than the money spent on such stuff. They were the tools my mother used to create our home. My mother was a homemaker of the first order – always working to create a place of peace and warmth – for us.

As I’ve worked on this never ending project – and trust me, it’s going to take years – it has occurred to me that we’re not dismantling the life Mom and Dad put together.

We’re reassembling it and Mother is homemaking still as those items come to my home and my sibling’s homes and into the homes of her grandchildren.

There are teachable things in much of this stuff.

Over the course of the next several months I am going to call the family together again and again. I hope you will all come with your trucks and your minivans and your children, no matter how small, to help find the right homes for all these things that my Dad alone no longer needs.

Yes, some of it will be donated to charity and some will just be thrown out. But what can be used should be used by the family.

But as we gather from time to time to go through this stuff I hope you take the time to consider the story behind the stuff.

Weeks ago I found a couple of old reel-to-reel tapes that had recorded on them the audio of Christmas morning from 1967 that my Dad had made at the time. I was four. Can you imagine that morning of my parents with a 7 year old, a 5 year old, a 4 year old and a 2 year old?

Well today we stumbled upon the reel-to-reel recorder that made those recordings. Dad and I had already discussed it, hoping to find it eventually and he shared with me what that piece of equipment meant to him at the time. “It got me through college,” he told me. I understood what he was saying.

But when we found it today Enoch looked at it and not having anything to compare it to in his life experience had to ask, “What’s that?”

Enoch was there to do the heavy lifting and this thing is about the size of an ice chest and quite heavy. Enoch could only remark, “Well iPods were heavy back then!” as he hefted into the vehicle. In my mind, I’m thinking – “Wait until we get that thing going so he can hear when he old man was a four year old.”

Dad right now is very focused. He has been working on his mother’s history and I cannot wait to show you what has become of it. He is also working on my mother’s history, filling in gaps and providing a narrative that I think even my siblings will be surprised by.

As we have dug through the mountains of things the family history stuff has been set aside. There is SO MUCH to wade through, to organize, to scan and to, frankly, rescue.

For those of you who do not know, Dad has cancer. This was learned only about a month after Mom passed. It’s rare, it is treatable but he is in a stage of really not knowing how bad it is or how long he has. He’s hopeful, positive and looking forward.

Next month he will have a crucial exploratory surgery. We hope to know as a result of this procedure more about what he is exactly facing.

This is part of the reason why we are pushing so hard right now to get some order to all this “stuff”. Not only can Dad not physically handle this alone he will need help to organize and perhaps even delegate how our family history is managed going forward. He will need the time and attention of all his children and grandchildren who value their family history to step up and take a part in this.

Some have already begun. Matt, for example, has been scanning and organizing the letters from Grandpa Carl. That’s been a long-time project and he’s tackling it. It will give access to that material to all of us.

But there are other projects waiting to begin. And that is really what this is all about.

It isn’t a storage unit filled with stuff. It is part of all of us.

And guess what? I came home tonight and realized something: I’ve got a garage full of stuff too. It’s not as big and there is not as much.

But it is every bit as precious.

I’m betting you’ve got stuff too.