It has been an interesting time for working on family history.

The part I like least about this work is prospecting for data – finding the names, dates and places necessary to fill out the tree.

That’s ground-floor stuff and I’m much more of a storyteller. I want to know what’s beyond the data with each person.

I got a message a few weeks back from my niece Michaela asking if I had any more female names for baptisms. As it turned out I was fresh out. She will be going for her own endowments next fall so until then she’s limited in what temple work she can do. So, for her sake I decided to see what I could find out there in the part of the work that’s not my favorite.

I’m glad I did. From it I learned more of the story.

~ Going for the Low Hanging Fruit ~

In all the recent work on my step-grandfather’s line – that of Pascal Henry Caldwell – I assumed I would find a lot of work on his family. After all, it now stretches back to the year 1100.

But that Caldwell family must have a lot of people out there working on it that I do not know about.

Not only did I find the data but I found lots of temple work that has been done over the past several years.

The Caldwells were not the low hanging fruit I thought they were.

So I went back to my mother’s line to see what had changed. Due to the pandemic and the situation with my Dad it’s maybe been three years since I’ve been down in the weeds on my mother’s lines. There was enough there – and still is – to keep us pretty busy.

What I noticed right off is that others have really stepped up in the time I’ve been away. In fact, I would wonder what my mother would think today if she saw how things have progressed since the last time she was able to look at it herself.

Of course, what I was about to learn is that she knows it all without being here.

She woke me up one night this week. It was her voice I heard.

I had a long session on Family Search and Ancestry on Wednesday. I had decided to go back to some familiar names to find out where we stood on completing their temple work and what additional records we could attach to names.

When I attended Roots Tech I listened with interest to hear the numbers from Family Search and Ancestry about records they have added since the last Roots Tech was held. Billions and billions of records are added each year from sources all over the world.

I have noticed the last several years that military records have been added in abundance. And, of course, the 1950 census was just released and I wanted to update information from any family who participated in that event.

It was a long day that resulted in many “new” records being added but nothing that changed the outcome in temple work or new family discoveries.

I had a nagging sense, however, that I was actually doing something useful. That something was going to come of going back and adding records to names that technically didn’t need them.

I hit the pillow at about 1:00 am, exhausted, and slept for about 90 minutes. Then, in a dead sleep, I felt a poke on my shoulder and my mother’s voice said “John Jackson”. And that was all.

In all my years of working family history I can claim to have had feelings and promptings to something I needed to do.

But never have I ever felt anything so specific.

So I immediately got out of bed and began a search for John Jackson.

Of course, I assumed that was the entirety of his name.

There are a billion John Jacksons in the world but none that I could find that tied to my mother’s family.

I was momentarily confused as I tried to think through the problem. Then it dawned on me.

He was the son of Erastus Ulysses Carson, who had two families with two separate wives. We knew about John Jackson years ago and did his work, along with all of the other children of Erastus and his two wives.

What we did not know what that John Jackson, like his father, had three wives. He had children with each of them. The reason we didn’t know this before is that the records showing all this were not available the last time any work was done on John Jackson Carson.

In fact, some of the wives and children fell under the 110-year rule, meaning they might have been discoverable in some cases but we could not do their temple work.

Between the combined new record resources of Family Search and Ancestry, we have now a more complete story of John Jackson – and his 8 children from his three wives.

All of John Jackson’s children are now on the other side. Many of their records are now available. He has grandchildren and great grandchildren still living all over the country.

John Jackson’s new discoveries made me question everyone on my mother’s lines. So I went back, straight to my grandparents, and began just adding what new records I could find.
Most yielded nothing new.

But, as I got past that great-grandparent level – say from 1850 to 1920 – I started uncovering a lot of new people. Wives added, children born, etc. The make-up of some family units changed dramatically.

For example, Aunt Glenora Welty, my great-grandfather’s sister, has been for years a kind of lost person.

But as is often the case with female records, it ended there.

From years back I can find online inquiries from my mother asking for help in trying to discover whatever happened to Glenora. I spent considerable time about 6 years ago on Glenora and got no further than my Mom did.

But after John Jackson’s discoveries I decided to give it another go and in 20 minutes I was able to finally get somewhere.

Glenora married in 1887 at the age of 18. On the wedding record, which I think may have been available for years, they spelled her last name as Kelty instead of Welty. Her parents were not listed on the marriage record, as was common at the time.

Glenora was an usual name at the time and evidently she never used it after marrying. Every new record I found of her she is listed as Glenna.

In fact, thanks to all these new records I was able to find a brief obituary about her in the local paper: 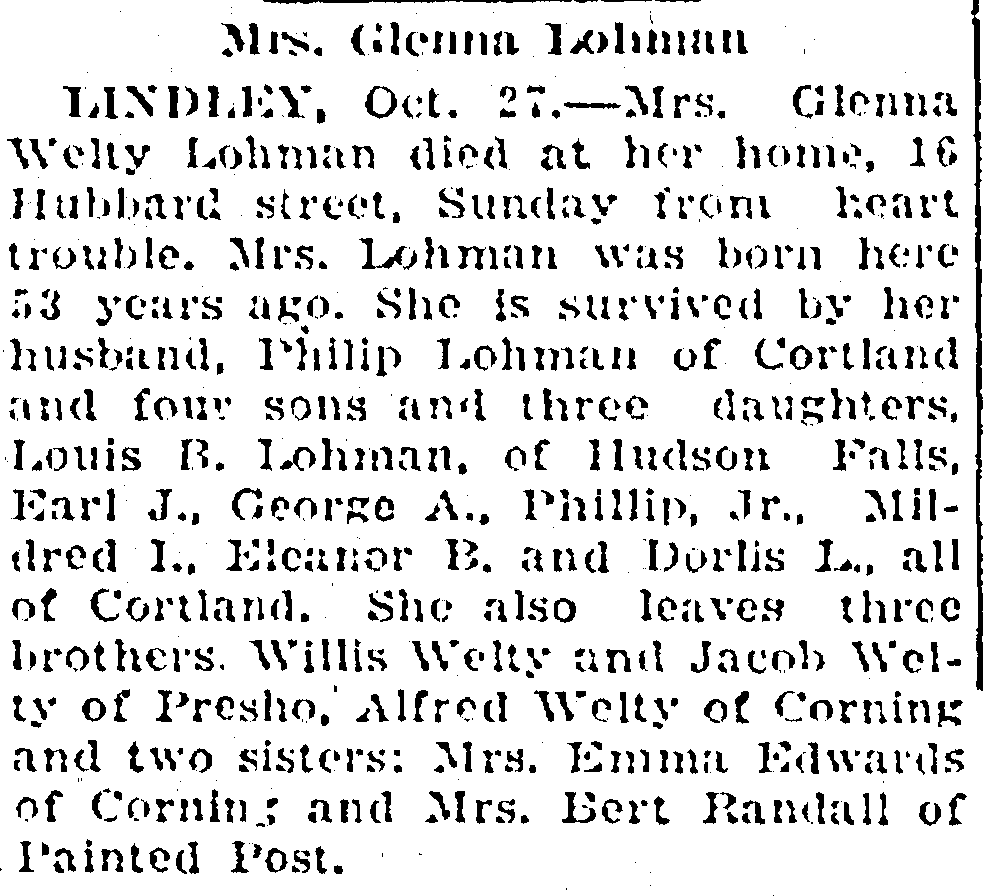 Of course, discovering this entire family of nine people led to other stories. Glenna had a daughter named Eleanor Beatrice Lohman who never married. She died in France in 1958.

That was a curiosity to me and I wondered what happened.

Turns out, she was in France working as an insurance clerk and while there she died suddenly of a brain hemorrhage. When a foreigner working overseas dies there is a report made to send to the family – and that report is accessible now through Ancestry.

Another good reason to plow over old ground is to discover what other family members (most you likely don’t even know about) have added to either Family Search or Ancestry.

Someone at some time posted this image of my great-grandparents, Kit and Effie Carson (Kit was John Jackson’s half brother): 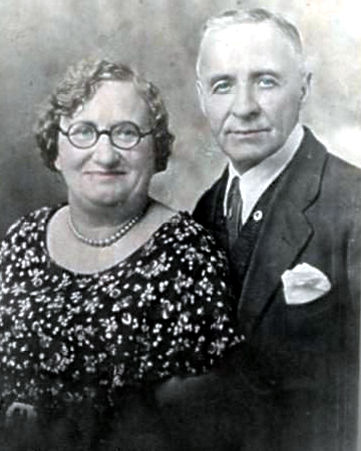 That wasn’t the only family photo I recently discovered. Below is a picture of the Willis Welty family around the year 1915 or so. Willis is Glenora’s brother. Why is this important? Because when my grandmother – Winifred Calista Welty – was orphaned by the deaths of her parents it was with this family that she lived for a long period of time: 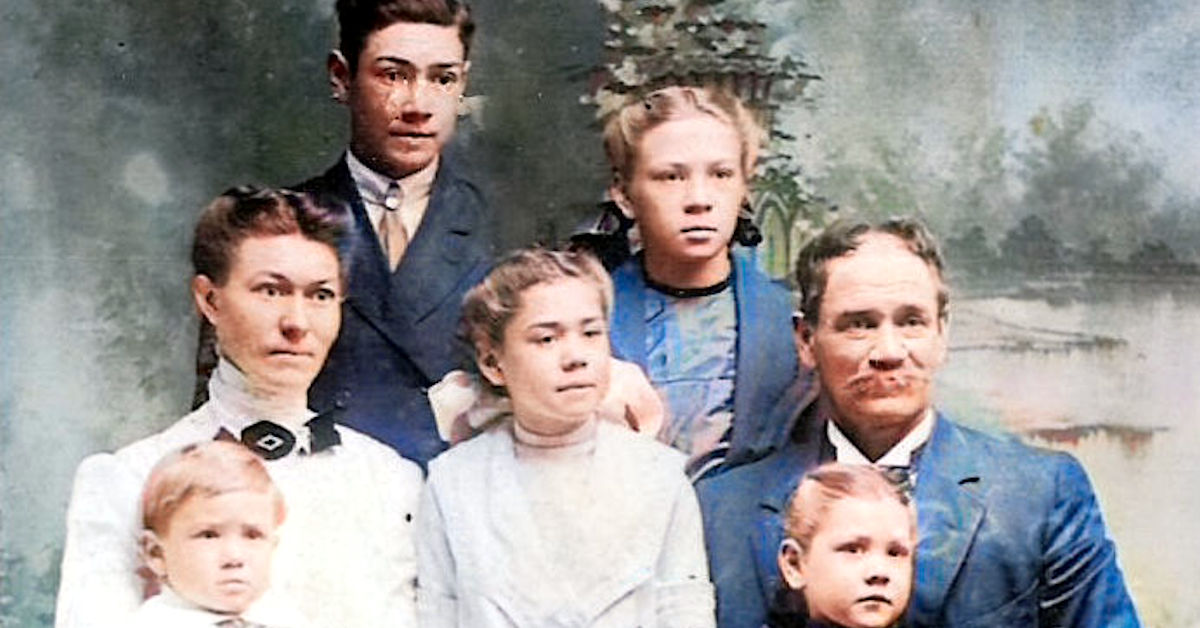 Can you see why continuing to look for people we have found adds to the story? When my Nana died in 1967 my mother was only 24. She had nothing of her family that was known. Since that time we have been able to piece together their stories as every new record, photo or story is added.

I’m not done discovering things as I work through ground that has been plowed before.

In fact, I’m finding that I can get 20 to 30 records I can attach now to people who have lived in past 150 years on average. Not every person – but a great many.

This has me motivated to keep working on names we’ve already worked on before. There are stories to uncover in names we have already known about and perhaps have done the temple-work for.

It is good to learn more of their stories.

My Cousins, My Neighbors