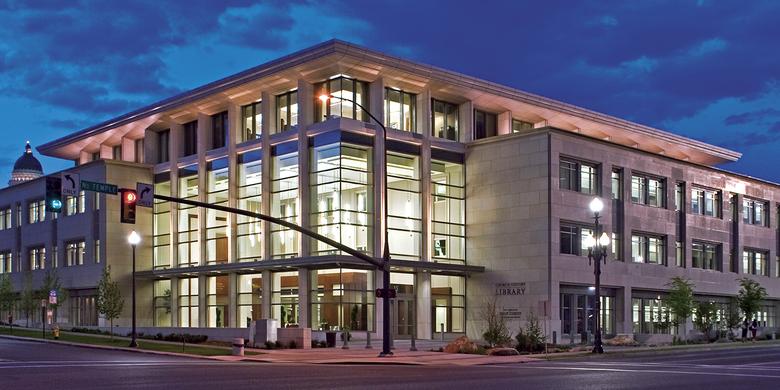 For several years now the Church History Library has teased me. Knowing what I know now about much of our 19th century family history I’ve wanted to go there to see what I could find out. Today, after registering for Rootstech, I had a few hours to kill before my first class. Now was the time.

I hoofed it on over there and walked into the front door, meeting a man in a suit and wearing an ear piece. He looked at me and asked what I was looking for.

“The sword of Laban,” I said confidently.

Ok, I didn’t say that but I wished I had thought of it at the time.

But that is the difference between this facility and others I have visited associated with family and church history. In this building they will allow even amateur researchers like myself access to Church records.

I decided I would play nice and follow by the rules. They checked my ID, made me log on to my LDS.org account and then I had to watch a video about how things are handled and what the procedures were there at the library.

After going through all that I put my visions of Liahonas aside and meekly asked for the ward records for Mendon, Utah.

In the time I had to spend I thought a worthy goal would be to find out if Ann Findley Westover was really primary president in Mendon for 37 years.

I had about ten minutes with a historian. He seemed impressed with my target and what I knew about Grandma Ann already. He was confident that maybe the records would show something of her calling and service.

As it turns out the ward records dated back to 1861 (I knew that) and all I needed to do was to sort through those. They made me sign, ditch my coat and phone, and sent me to the reading room where I awaited 4 rolls of microfilm. I wouldn’t see the records themselves – because they had them on film and that was safer for me to handle.

I thought about that sword again – surely they had a picture, no? I still lacked the nerve.

The first roll of film had nothing I could use, though I spent a good 45 minutes going through it. There was no rhyme or reason to what was filmed. One minute I was reading notes from the Bishopric in 1890 and the next I was dealing with YMMIA meeting notes from the 1950s.

There she was. Week after week, first for years and then for decades.

These were comprehensive meeting notes. Immediately I felt the pangs of guilt for the 2-line meeting notes I kept as Teacher’s Quorum secretary years ago. These pioneer meeting notes outlined total attendance (over 60 kids usually in the Mendon Ward), who spoke, what they sang and the themes of the meeting.

In looking at week after week of these notes one trend became clear: President Westover was the storyteller of the Mendon Primary. She was always relating something – the story of the blind boy who had faith, the story of Moses from the Bible, the story of Joseph sold into Egypt. My favorite note was “President Westover tells stories of early church history”. Boy, what I wouldn’t give to hear that story today!

In all, I spent three hours in 19th century Mendon, perusing minutes all the way past the year 1906, when Ann’s name stopped appearing the minutes and she no longer presided.

I doubt she was Primary President for 37 years…though I think she spent close to that time in the Primary presidency because she was a counselor for several years before she was made president.

It was a good training session for me. And you can bet I’ll be back.

I wanna see that sword.

Was it one of the Three Nephites?
0 replies

The Epic Life of Gardner Snow